PRIMOGENITURE isn’t really something I’ve ever given much thought to.

But never has this old feudal custom — making the royal first-born heir to the throne — been more of a godsend.

Read our Meghan and Harry live blog for the latest updates

Two years ago we probably all wished Harry was our first-born. Now we’re thanking our lucky stars he’s not[/caption]

Like many people, I used to love Prince Harry. He was the fun, quirky, spirited, more “normal” of the pair — a Nazi slip-up notwithstanding.

While the tide has been turning for some time, these past few days have shown just how public perception of the brothers has gone a full 180.

Latest reports claim peace talks between the two warring siblings have stalled in the wake of a series of leaks from the Sussex camp.

While the tide has been turning for some time, these past few days have shown just how public perception of the brothers has gone a full 180 in William’s favour[/caption]

Within hours of Harry’s return to California, following the funeral of his beloved grandad, the Duke of Edinburgh, a flurry of positively spun articles appeared in his and wife Meghan’s favourite publication, People magazine.

Then their self-important pal, and co-author of sycophantic biography Finding Freedom, Omid Scobie, declared that Meghan had twice spoken to the Queen. Philip, surely, will be writhing in his grave.

This, of course, is from a couple who recently sued a Sunday newspaper over a supposed breach of privacy. And a couple who refuse to engage with the British tabloids.

No strangers to accusations of hypocrisy, the private jet-loving environ- mentalists have outdone themselves. In Line Of Duty terms, the Duke and Duchess of Sussex are “rats”: Grassing up their loved ones in return for better press.

The main difference being that instead of going into witness protection, they go on to Oprah (and employ a £3million-a-year private security team — previously paid for by Prince Charles).

Prince William walk apart as they head to Prince Philip’s funeral, but Wills has proved himself to be a true leader while Harry flew back to California[/caption]

Whether Harry deeply regrets the Oprah debacle — or never getting a chance to see his grandad to make good before he died — no one but Harry will ever know.

Yet his decision to flee back to his £11million Montecito mansion 24 hours before his grieving grandmother’s 95th birthday seems a strange one.

Yes, his pregnant wife is in her third trimester, but would another day really have made such a difference?

Much has already been said of the reinvented couple’s £100million-plus Netflix and Spotify deals.

And with Harry keen to dismiss suggestions he is workshy, week after week he gets a new, highly lucrative job.

His latest sees him with the grand new title of Chief Impact Officer, or Chimpo to give it its full Silicon Valley acronym.

Alas, it emerges, Chimpo means “penis” in Japan. Which is not the first time he’s been a right royal c***.

In stark contrast, dad-of-three William ploughs on with dignity.

With ever-loyal Kate by his side — again, a woman we once shamefully considered dull compared to beautiful, glossy, Hollywood starlet Meghan — he has come into his own in recent days.

A Villa fan, and President of the FA, Wills knows his football, and defied protocol to speak out on behalf of fans.

Perhaps a few days spent in never- knowingly-publicity-shy Harry’s company had rubbed off on him.

Whatever the reason, William broke free of his royal shackles and showed some chutzpah.

Within hours of Harry’s return to California a flurry of positively spun articles appeared in his and wife Meghan’s favourite publication, People magazine[/caption]

He and Kate haven’t been briefing the world’s press on their woes. And they’ve had an excellent pandemic.

Not even a nasty bout of Covid-19 could stop the second-in-line to the throne from carrying out 14 zoom engagements in his month of illness.

With “service” and “duty” apparently the buzzwords post-H&M’s quitting of the Royal Family, no one exemplifies these better than William.

Two years ago we probably all wished Harry was our first-born.

POISON FOR THE SAKE OF BEAUTY

Judging by Madonna’s latest pics – those grouper fish lips and smooth, chipmunky cheeks, it seems we’ve learned nothing about the price of vanity[/caption]

A BBC2 doc this week, Make-up: A Glamorous History, was a fascinating insight into human vanity.

The Georgians, it turns out, liked nothing more than caking their faces in lead-based whiteners which could leave you deaf, infertile or dead. (The latter, of course, resulting in you being super pale without all the aforementioned hassle).

Elizabethan women, meanwhile, squeezed themselves into such tight corsets it led to muscle wasting.

Today, the same women (and men) who obsess over clean-eating, daily step counts, meditation and imbibing seven gallons of pure, oxygenated, bottled water fresh from a Fijian spring, are the ones shovelling industrial amounts of Botox in their foreheads* and filler in their lips.

The former is a poison and the latter, according to a 2011 study, can cause “blindness, facial collapse, herpes or blue-tinged flesh”. So that’s nice.

Four centuries on, have we learnt nothing from the Georgians? 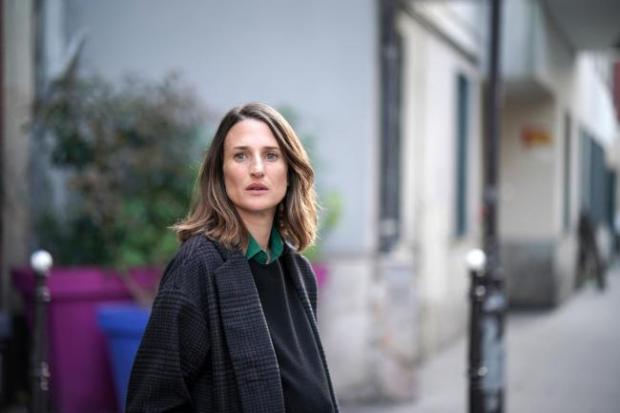 EXCITING telly news: Call My Agent is getting a British makeover.

Undoubtedly the best thing to come out of France since melted Camembert.

A BLOW FOR US GIRLS

It’s hard to pin-point the singular most annoying thing about this cluster of incense-sniffing, hemp-wearing women, but I think it’s the way they held their (colour-coordinated) hammers[/caption]

THIS week HSBC was on the receiving end of the Extinction Rebellion muppets’ wrath.

While it’s hard to pin-point the singular most annoying thing about this cluster of incense-sniffing, hemp-wearing women, I think it’s the way they held their (colour-coordinated) hammers that grates the most.

Delicately tapping at the glass-fronted walls of the bank’s London HQ, they looked like they were hanging picture frames, not spear-heading an international war on climate change.

Apparently the gang regard themselves as modern day Suffragettes.

But Emily Davison died for her cause, hurling herself before the king’s horse and getting trampled to death.

Their “girlie” tap-tapping, interspersed with a little sit-down on the pavement in the warm spring sunshine, isn’t really up there in the sacrifice stakes.

If anything, they’ve put feminism back 50 years. 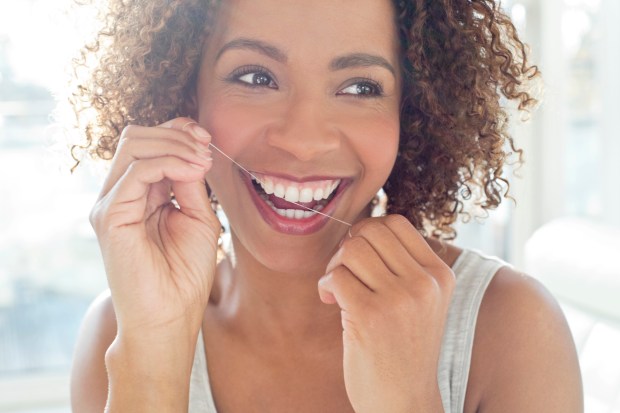 MEDICAL professionals bring out the worst in me.

During a recent check-up, the very nice dentist asked when I’d last flossed, the correct answer, of course, being: “When I last saw you.”

Instead, mouth akimbo, I gurgled something like: “Last week.”

Much like a trip to the doctor and the alcohol-units-per-week question – “about four to six” – (add a teen) – a trip to health professionals turns me into a bare-faced liar. Probably a toothless one, too.

LOVE IT… OR SO WHAT?

Am I the only person in Britain utterly indifferent to the stuff?[/caption]

CRISIS in the condiment aisles.

Supplies of Marmite are at an all-time low after manufacturer Unilever had to halt production of jars during lockdown.

As a result, the nation is divided: Those who love it are in meltdown, those who loathe it are merrily cheering into their marmalade.

Am I the only person in Britain utterly indifferent to the stuff? 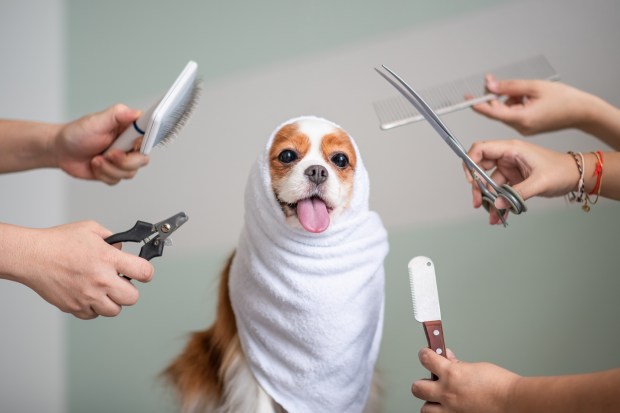 WITH the puppy population up by more than a million in the past 12 months, we’re spending more than ever on our furry mates.

Dubbed the “hound pound”, dogs mean big business. As I can testify.

A lockdown cliche, I bought a puppy, from a (good) breeder, and have been broke ever since.

On top of the usual costs – toys, vets’ bills, jackets she refuses to wear, aesthetically pleasing barriers to stop her hurling herself off the balcony – I’m now forking out 40 quid a day for doggy day care.

Her food bill is on a par with mine, because she refuses to eat tinned food, and I spend my mornings lovingly trimming the fat off raw chicken thighs and heating her lactose-free milk.

Yes, some may say I’m mad – a friend suggested I shove her in an orphanage after she vommed on my White Company bedsheets – but Dora, the miniature Dachshund, is my only child. If I want to spoil her, I will – and it appears millions of pet owners across the land agree.

An evening indulging some of the most pampered, overpaid people on the planet is nauseating at the best of times.

But during a pandemic it seems even more ridiculous.

As the past 12 months have shown, it’s doctors and nurses we should be celebrating, not Brad Pitt.

Girl, one, fighting for life in hospital after being found unresponsive at home in Bolton

3 Drawers Chest Of Drawers A must have Bedroom Furniture-

Lonely mammoth starved to death after it was kicked out of herd 17,000 years ago, analysis of tusk reveals