CHIC bride Carrie rented a designer hippy dress for her wedding to Boris Johnson — for just £45.

Boris Johnson and Carrie Symonds at their wedding celebration[/caption]

The couple slipped out of Downing Street yesterday afternoon to take a two-day “mini-moon” by the seaside.

Thirty guests piled into the Downing Street garden for a folky singalong to celebrate Boris Johnson tying the knot with Carrie.

They partied around a fire pit until the small hours of Sunday after the PM’s top-secret wedding on Saturday.

The couple, who got hitched at Westminster Cathedral, will celebrate again with a huge bash for all their friends and family in July 2022, as we revealed last week.

Her blonde locks were curled, complete with an intricate flower crown made from yellow roses and white daisies.

The embroidered tulle number has now completely sold out online.

The newlyweds posed for a set of snaps in the Downing Street garden after the ceremony, with Boris in a dark navy suit and blue tie.

Carrie also shared a snap of the couple on Instagram last night, taken by photographer Rebecca Fulton,. She said she was “very, very happy” and thanked her followers for their “very kind” wishes.

To the shock of No10 aides the long-awaited day had been in the diary for months, with all attendees sworn to secrecy.

Guests were ordered not to speak to anyone and last night remained tight-lipped about the precise details of the couple’s hippie-style celebration.

The Sun can reveal that Boris chose his closest brother Leo to stand by his side as best man, and fellow siblings Jo, Julia and Rachel were in attendance too.

Both the bride and groom’s mothers joined the celebration, but Carrie’s father Matthew Symonds did not.

Last night a spokesperson for the couple declined to comment on whether he was invited.

It’s also thought that none of Boris’ four grown-up children were there to see their father re-marry.

Other close friends including Nimco Ali and Anna Pinder were rumoured to be on the guest list for the lavish bash.

The couple’s much-loved Jack-Russell cross dog Dilyn made an enthusiastic appearance at the afterparty but was kept out of the church.

Guests were treated to a ‘best of British’ afternoon tea and drinks following the service.

And folk-band called The Bow Fiddlies was on hand to drum up a medley of tunes throughout the afternoon and evening, taking requests from the couple and guests – including hits by Mumford and Sons.

Although there was no official “first dance”, the group sang and danced around a fire pit until the early hours of the morning, leaving by the backdoor at around 1.30am.

Looking to read more on the Prime Minister's life? We have you covered…

Boris Johnson with his family[/caption]

The couple decked out the traditionally posh Downing Street back garden, usually used for events and hosting dignitaries.

Festival-style decorations including multi-coloured bunting was hung from trees, with several hay bales, flowers and a range of cocktails on offer.

Bride Carrie was even pictured barefoot to complete the vibe. But guests were told not to take photographs for fear of the news leaking out.

The rented dress makes the ‘something borrowed’ and the PM picked a power blue tie for the big event as his ‘something blue’.

No Tory MPs or cabinet ministers were thought to have made the guest list for the bash.

Last night there was upset in the Tory party that no ministers or MPs managed to secure an invite to the most sought-after wedding of the year.

The guest list was capped thanks to the PM’s own lockdown rules which dictate that only 30 people can attend weddings at the moment.

THE Catholic priest who married Boris Johnson and Carrie Symonds said it was quiet and dignified.

The acting administrator of Westminster Cathedral said yesterday: “It was lovely. I’m not going to say too much but it all went well. It was very quiet but a very dignified occasion.”

The secret ceremony, which took some aides by surprise, has been planned for six months, with Fr Humphreys one of the few trusted to keep the details under wraps.

Writing previously in a church newsletter, Fr Humphreys said his interests include “history, theatre, a little bit of politics”.

He is also a keen Arsenal fan who enjoys “singing and playing piano and organ”.


Boy, 4, reported to police by his nursery school over toy smartwatch

After June 21 the cap is expected to be ripped up, allowing unlimited numbers to big bash wedding celebrations.

Some thought there could be a reception party later in the year for politicians to heal some of the upset among the PM’s colleagues.

Cabinet ministers expressed a complete surprise at a lack of invite to the close-knit ceremony and said it was “bad party management”. 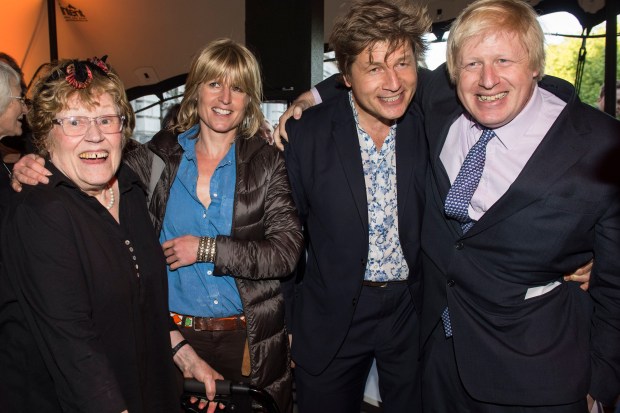 He is a co-presenter of Radio 4 series Future Proofing and co-founder of advisory firm Sustainable Finance, part of professional services group PwC.

Leo went to Oxford, like his siblings, and in 2015 his sister Rachel, 55, said he was the “perfect mix of Michael York and Jeff Bridges”.

She said at the time: “He walked into a London hotel recently and every woman looked round.”

Leo also founded an organic wine company from his home in North London six years ago.

Also seen at No10 yesterday was Boris’ close pal Hugo Dixon, 57, a journalist and the ex-editor-in-chief of the financial commentary website Breakingviews.

Dixon and Boris are childhood friends and the pro-European has previously spoken about his divide over Brexit with pal Mr Johnson.