BRITS are bracing for tropical temperatures today as the UK is set to be hotter than the Bahamas – before thunderstorms rain on our parade later this week.

The scorching temperatures continue today after a weekend of sunshine, seeing the mercury climb to 29C ahead of the expected wet weather.

Read our UK weather live blog for the latest forecasts

Durdle Door in Dorset was also popular with sun worshippers[/caption]

It comes as high pressure makes its way from the Azores island in Portugal, settling across the Midlands and the southeast of England.

It means parts of the UK will be hotter than the West Indies holiday hotspot today, as temperatures in the Bahamas only reach 26C.

But Atlantic influence is to be expected to dampen spirits over the northern and western parts of England, as it brings over cloudier skies and patches of rain. 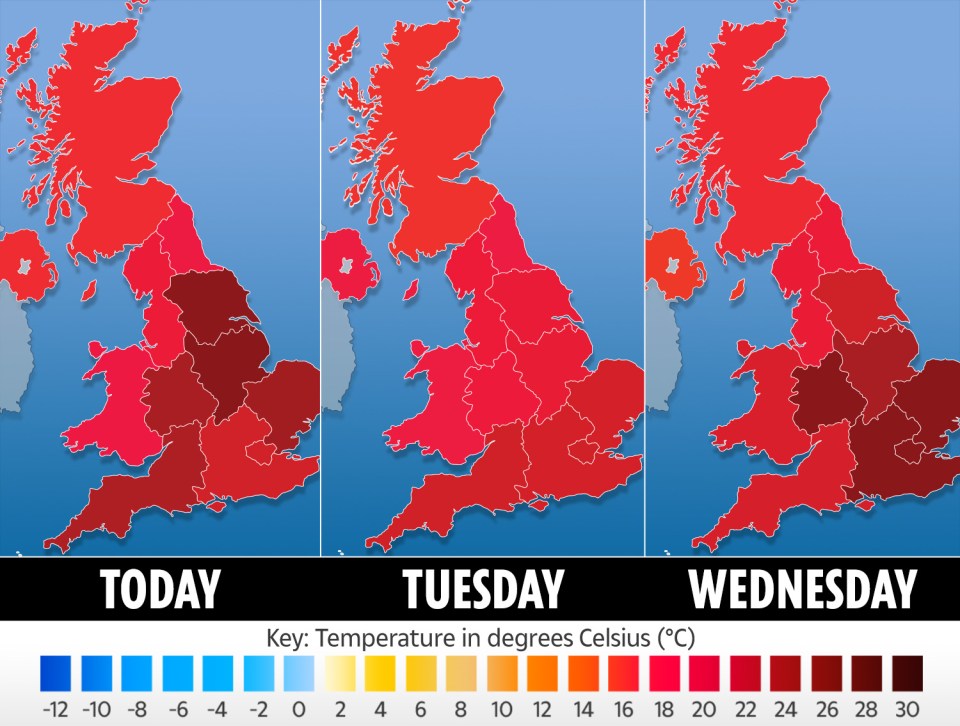 Crowds enjoyed the South of England Show 2021 in Sussex[/caption]

The UK’s sunshine is then set to spectacularly grind to a halt as a MONTH’S worth of rain is forecast to fall in just two hours.

Up to 50mm could fall in some areas on Wednesday – equating to the average amount in South East England for the entire month of June.

Clear spells persist down south, while showers will begin to introduce themselves in the North.

But the “thundery breakdown” forecast from 6pm on Wednesday has forced the Met Office to issue a yellow weather warning for some parts of the UK.

People make their way along the Long Walk in Windsor[/caption]

People enjoy punt tours along the River Cam in Cambridge[/caption]

Thousands of people flocked to the beaches of Bournemouth, Dorset[/caption]

Although there is “significant uncertainty” about the location and timing, the thunderstorms are expected to move across the country and potentially eastern Wales.

Meteorologists have warned the “intense” weather could bring torrential downpours, hail, lightning and strong winds from late on Wednesday through to Friday morning.


Most common Covid symptoms have CHANGED, docs warn – here’s what they are


Lockdown lift could drag on to AUGUST due to Indian variant, ministers admit

“After that, it will bring in fresher air from the West and so that will clear away the hot weather.

“The thunderstorm warning covers quite a large area of England and Wales. Closer to the time we will have a better idea of where exactly they should be,” she continued.

It comes after a weekend of fun in the sun, seeing Brits flock to parks, beaches, and pubs to soak up the rays, before celebrating England’s first Euro 2020 win in scorching temperatures.

Zoe Howell throws a bucket of water over Joshua, a New Forest Pony near Ringwood in the New Forest, Hants[/caption]

How to Create Awesome Travel Videos on Your Phone

The 9 Best Secure Messaging Apps In 2021