LONDON’S teen murder rate has soared to its highest in more than a decade – as cops fear this year could be the bloodiest since 2008.

An increase in post-lockdown stabbings has meant 17 teenagers have been killed in the capital so far this year. 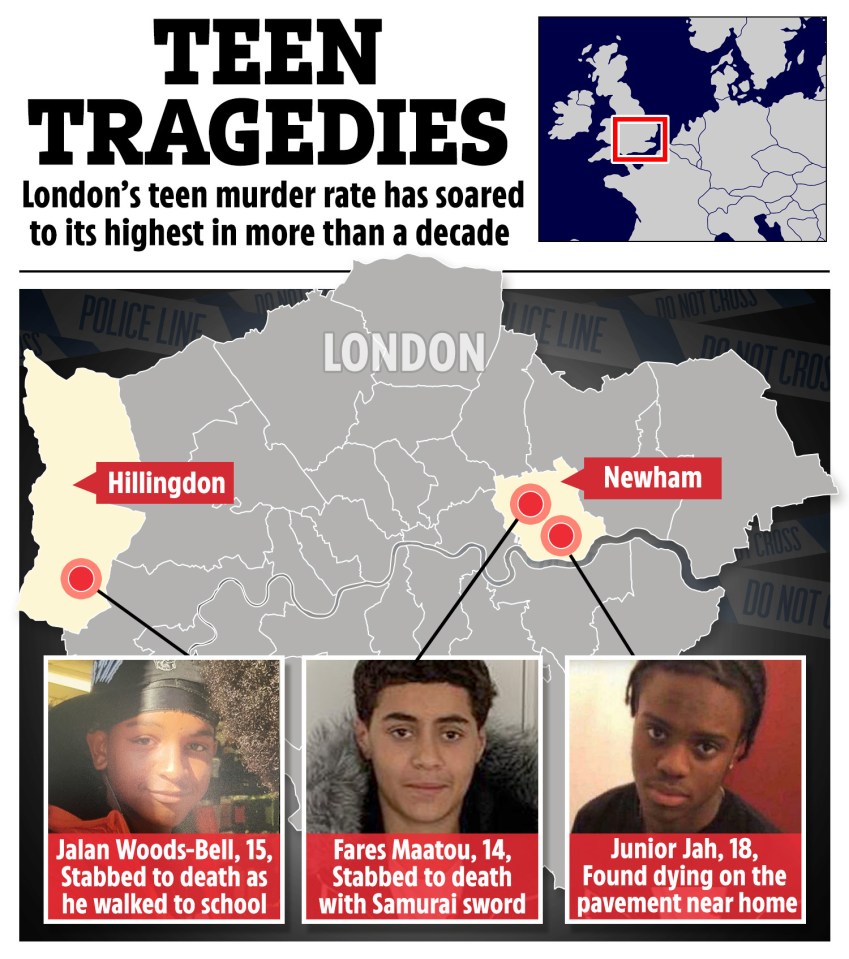 Met Police fear the violence will get worse as the weather improves over summer.

Late last night, a man in his 20s was killed in a “doorstep execution” by a drive-by shooter in Balham.

Horrified witnesses said the man was blasted in the back of the head with a shotgun in another example of violent crime in the UK’s biggest city.

The teenage murder rate fell greatly last year due to the outbreak of coronavirus and the following lockdowns.

However, there have already been more teenage homicides in just over six months this year than there were for the entirety of 2020.

Commander Alex Murray told the Telegraph: “We have seen an increase in the murder of teenagers, with 17 being murdered so far this year.

“If London continues to see this rate of violence we will be on track to see the worst year for young homicides since 2008.

“Every single murder is a tragedy, but they are not spread evenly either geographically or by age and ethnicity.

“Of these young victims, more than two thirds are black and 15 were killed with a knife. We are extremely concerned about this and are calling on every Londoner to play their part to prevent further needless killings.”

The youngest teen to be killed in London this year was Fares Maatou, 14, who was allegedly stabbed to death with a Samurai sword in Newham in April.

Cops later charged a 14-year-old boy with murder, and made a fourth arrest after Fares was fatally attacked in his school uniform.

Despite the best efforts of the emergency services, Fares was pronounced dead shortly after 4.30pm outside of Zzetta pizzas on Barking Road.

His family were “absolutely devastated”.

Fares Maatou, 14, who was allegedly stabbed to death with a Samurai sword[/caption]

Junior Jah, 18, was killed in Canning Town, East London in the same month.

He was the second member of his family to be fatally stabbed after his older brother Ahmed, 21, was killed in 2017.

Junior was found dying on the pavement near his home.

A neighbour said: “I came out of my house and saw Junior lying there. They are a nice family. It’s so sad.”

Speaking at the time of Ahmed’s death, his father Abubakarr Jah, a railway worker, said: “Young people need to put down their knives and stop the violence.

“It is destroying families and communities.”

Earlier this month, 15-year-old Jalan Woods Bell was stabbed to death as he walked to school in Hayes, West London.

A boy, 15, from Hillingdon, who cannot be named for legal reasons, was charged with his murder.

Cops launched an investigation after being called to reports of a fight close to Global Academy – a college for students aged 14 to 19.

Jalan was found with stab injuries and died at the scene.

Mr Murray said cops were facing a “wall of silence” when they tried to investigate teen killings in London.

He said: “Through lockdown there has been an incredible amount of work to take the wind out of the sails of people who drive violence.

“More than 400 guns have been recovered, thousands of knives and large quantities of drugs have been seized. A record £47 million in cash has been confiscated and high harm offenders have been taken off the streets.

“But detectives investigating serious violence often meet silence from people we know have information that could help prevent violence. We have seen it recently in the tragic shooting of Sasha Johnson that took place last month.”

Mum-of-two Johnson remains in a critical condition after being shot in the head at a party in Peckham, south London on May 23.

On Thursday cops charged Prince Dixon, 25, of Gravesend, Kent, and Troy Reid, 19, of Southwark, south London, with conspiracy to murder.

It brings the total number of people charged over the shooting to four after Devonte Brown, 18, and Cameron Deriggs, were previously charged with conspiracy to murder.

Mr Murray added: “We understand that some people may not trust the police, so we are working hard to build those relationships and show that we are only motivated by preventing violence. It is our number one priority.”

Yvonne Lawson, whose talented footballer son Godwin was murdered in 2010, said lockdown restrictions being eased had contributed to an increase in knife crime.

She said: “It has been 11 years since I sadly lost Godwin to knife crime as he tried to stop a fight between friends. Eleven years on, mothers are still losing their babies to knife crime in our capital. We should never get desensitised or complacent to youth violence.

“We need to all come together and fight this epidemic as we are fighting Covid-19. The police alone don’t have the cure, we urgently all need to work together, report what you know about violence and free young people from this terrible cycle.”

It comes amid fears fears London’s brutal gang war of 2017 could be repeated this summer.

Ahmed Jah’s murder in 2017 sparked a series of bloody revenge attacks across the capital.

The killing of his brother Junior this year has raised fears of a summer of knife crime in the capital as lockdown restrictions are eased.

Teenage deaths in London in 2017 were more than double those during 2016.

The number of teenagers murdered in the city was the highest for almost a decade – with 20 stabbed, five shot and another victim dying of multiple injuries.

At the time, Sir Craig Mackey, the Deputy Commissioner of the Met Police, said it was “truly unusual and extraordinary” for so many murders to have happened in such a short period of time.

“The reasons behind it are quite complex. There are a number of issues affecting knife crime,” he said.

“We are absolutely clear we are doing our part to do the things we can do as the police service… but we need others across London working with us to help tackle those underlying issues around a knife culture that has emerged across London.”

Met Police Commissioner Cressida Dick said in 2017 that stabbings in London had risen by 15 per cent that year.

She said the attacks were driven by a “core group of young offenders” who repeatedly assaulted and robbed “with relative impunity”.

Around the time of the stabbing spree, some of London’s most notorious gangs included Moscow17 in Kennington, as well as the Ghetto Boys in Deptford and the Woolwich Boys out on the Thames.

North of the river, Islington was said to be dominated by as many as 15 separate groups – like the Bemerton Mandem near King’s Cross and the Busy Blocks.

East London was awash with as many around 60 gangs, according to maps compiled and shared online, while in the typically more affluent west of the capital 35 gangs roamed the streets.

Croydon’s ‘CRO’ were mapped across much of the borough in the south.

A murder investigation is underway following a shooting in Balham[/caption]

The world’s first floating city is due to be built

Modern apartments for sale in Birmingham for investment