THE MOON and Jupiter reached conjunction this week meaning they’re pretty close together in the sky.

The two celestial objects reached conjunction yesterday but you could try looking for them late this evening and into the early hours of the morning.

The best time to view the Moon and Jupiter near each other will be after midnight and before sunrise.

The slimming Moon should appear a few degrees to the south of Jupiter.

You won’t be able to view them both in the same telescope frame.

They should still be visible with the naked eye if you have some binoculars and the sky is clear. 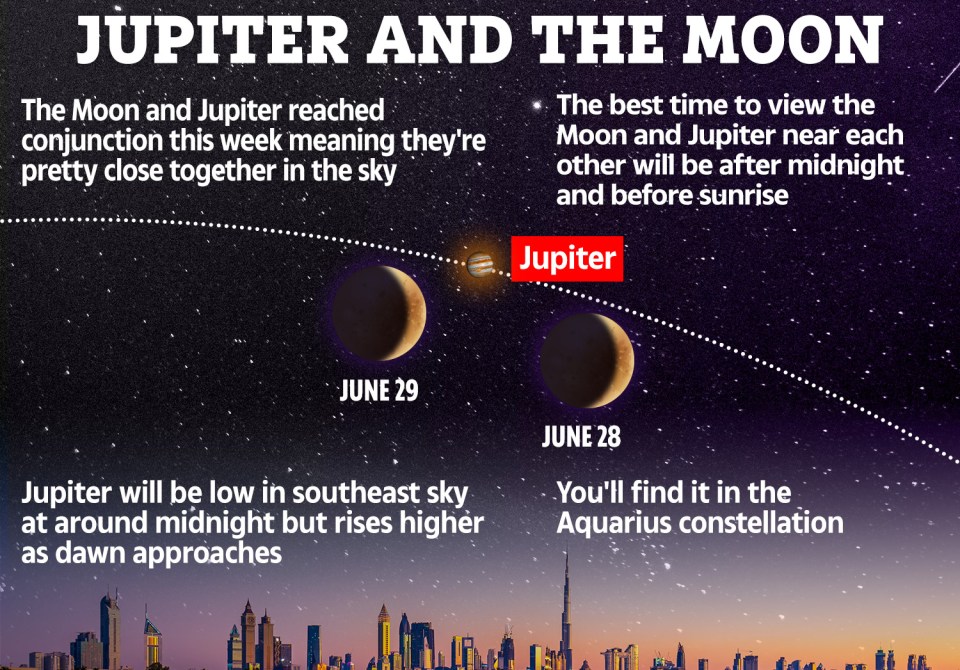 Jupiter will be low in southeast sky at around midnight but rises higher as dawn approaches.

You’ll find it in the Aquarius constellation.

Saturn will also be visible in the predawn sky.

Saturn will be lower down than Jupiter and to the right.

The Moon – our closest neighbour explained

Here's what you need to know…

NOSE FOR A NOSE


Inside Ancient Egyptian 'prison city' where EVERYONE had noses cut off


Ancient shaman staff shaped like a viper dug up after 4,400 years


Mercury facts: How many moons does it have and how far is it from the Sun?

In other space news, China successfully launched a three person crewed mission to build its own space station.

The European Space Agency has revealed it will be sending a probe called EnVision to study the planet Venus.

Scientist Brian Cox believes there could be 200 billion alien civilisations in the universe.

Stamp duty refund: How it works and how to claim

Five teenagers arrested for murder after man, 26, found dead as crowds clash with police at scene

'You cannot solely rely on a large audience': Why Forbes believes readers will pay to wear its brand