SAJID Javid has vowed to lift the remaining coronavirus restrictions on July 19 as he plans to make Britain the “most open country in Europe”.

The Health Secretary said his main challenges as he takes up his new role are how to restore our freedoms and how to tackle the NHS backlog.

Mentioning the sacrifices made by British people during the coronavirus pandemic, he said it is impossible to eliminate the disease completely, so we will need to find ways to cope with it.

The Health Secretary also urged everyone to get their jab as soon as they are offered one, describing the vaccination programme as “the single biggest contribution you can make to this national effort”.

Writing in the Mail on Sunday, he said: “We are on track for July 19 and we have to be honest with people about the fact that we cannot eliminate Covid.

“The economic arguments for opening up are well known, but for me, the health arguments are equally compelling.”

A No10 source told the newspaper: “This is a big injection of freedom that will make us the most open country in Europe.”

Mr Javid said the country will need to build on the changes which have arisen during the pandemic, such as using 111 to direct patients where they can get help, expanding the use of pharmacies and encouraging more people to use the NHS app.

He also pledged to put record levels of funding into the NHS and employing more staff in hospitals.

With all this in mind, Mr Javid said, the country will be “not just freer, but healthier, too”.

Among the Freedom Day plans expected to be signed off by the Cabinet tomorrow there is the end of quarantine for fully-vaccinated Brits who return from amber list countries.

And those who have received both doses of a Covid jab will not be required to self-isolate when they come into contact with someone who tests positive for the virus – but tests will be available for those who wish to have one.

Social distancing is also set to be scrapped, with the one metre-plus rule in hospitality venues will end, meaning a return to drinking at the bar without the requirement for table service.

Mass events, including festivals, will also be allowed under the proposals for the final stage of the road map out of lockdown, the Sunday Times reported.

Pupils could be asked to take daily tests instead of self-isolating at home if someone in their class contracts the virus.

Also, pubs and shops will no longer need to demand that customers give their details for track and trace or that they sign in with a QR code.

Double-jabbed Brits returning from amber-list countries reportedly won’t have to quarantine after July 19.

Boris plans to tear up laws that force people to cover their faces on buses and trains, and in shops and other indoor venues[/caption]

It comes as The Sun on Sunday revealed that mask-wearing will be ditched when Covid restrictions are finally relaxed on Freedom Day.

Boris Johnson plans to tear up laws which force people to cover their faces on buses and trains, and in shops and other indoor venues.

The Prime Minister wants to make it a personal choice rather than a legal requirement enforced with fines of up to £6,400.

And Mr Johnson will end the need to check in by signing a form or scanning a code when you go to a pub or restaurant.

Ministers are also discussing the possibility of allowing boozers to order drinks at the bar again.

But he faces a tough battle to win over senior medical advisers who insist the precaution will still be needed for many months.

A source said: “It’s all part of a shift from legal enforcement to common sense.

“There will be some official guidance that in certain settings, like a crowded train, it might make sense to wear a mask.

“But it will no longer be compulsory. People will be able to decide for themselves whether or not to cover their face.”

One minister told The Sun on Sunday: “It’s all about learning to live with Covid. This virus is going to be around for some time and with so many of us now vaccinated, we’re going to have to make up our own minds on when to cover up.”

Mask laws mean it is an offence for people to board a train, bus, plane or taxi without wearing one, unless medically exempt.

They are also a legal requirement in shops, supermarkets, theatres, libraries, churches, youth and social clubs, hotels and most other indoor settings.

The penalty doubles for repeat offences up to a maximum of £6,400.

Mr Johnson will announce he will scrap the law as part of the fourth and final step of the plan back to a normal life, The Sun on Sunday has been told.

But England’s chief medical officer Chris Whitty — along with other health advisers — wants the use of masks to continue after July 19.

British Medical Association boss Chaand Nagpaul wants indoor mask wearing to be among a number of “targeted measures” to stop the virus spreading.

However, Chancellor Rishi Sunak has said he expects to stop wearing a mask “as soon as possible” after the legal requirement is lifted.

Environment Secretary George Eustice added: “I think a lot of people will want to shed those masks. I want to get back to normal.”

Meanwhile, teachers will be expected to be double-jabbed before kids go back to school in September.

And ministers are considering whether to allow fully vaccinated people to carry on life as normal — with no quarantine or daily tests — if they come into contact with someone with coronavirus. 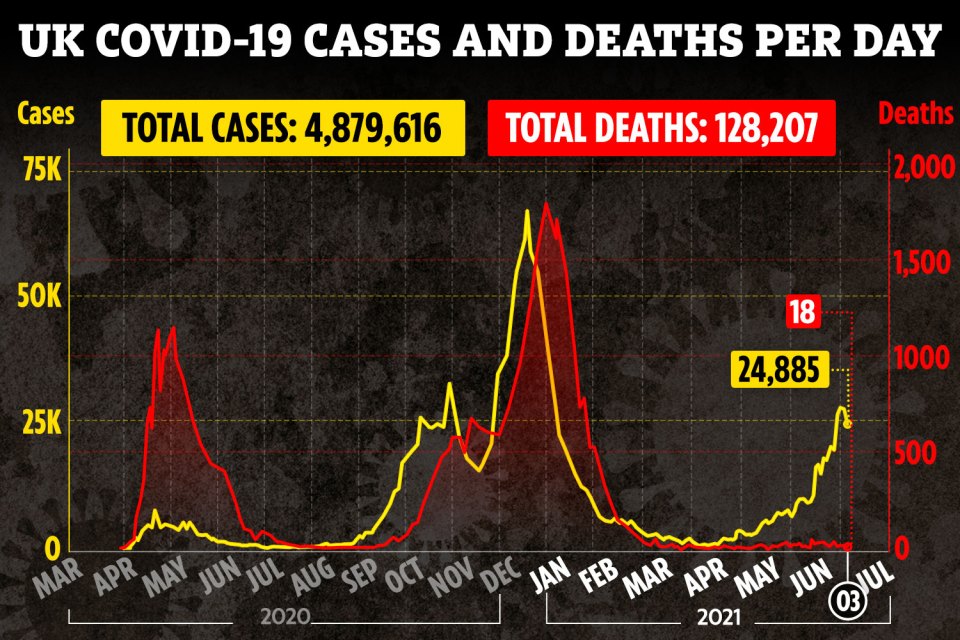 Why is my poop green and what does it mean?

England vs Germany – Euro 2020 last-16 date: Where will match be held and what time is kick-off?