TWENTY five areas are on a Covid watchlist because they have the highest amount of people sick with Covid.

Infections are surging across the UK after the new and highly infectious Delta variant took hold.

But there are a number of places with case loads at concerningly high levels.

Dundee has the largest number of active cases relative to its population, at 1,788 per 100,000, according to the Zoe Covid Symptom Study app’s report on July 7.

Fifteen of the 25 listed are in Scotland, which has been battling the Delta variant hardest along with North West England.

In more positive news, only five of the areas on the watchlist have seen the prevalence of the virus increase in the past seven days – St Helens, Wigan, Aberdeen, North Ayrshire and Stirling.

The rest have seen cases either remain stable or come down slightly.

It comes after the lead researcher on the study, Professor Tim Spector, said cases appear to be flat in the west but increasing in the east.

Graphs show increases in the regions of London, the North East and Yorkshire, the Midlands, East of England, South East and Wales.

Where are the cases increasing?

Looking at where new cases are on the rise, Public Health England data reveals five areas with the biggest rises in the past week.

Across England, 98 per cent of the 315 local areas have seen a week-on-week rise in rates and two per cent have seen a fall.

Manchester is 11th on the Covid watchlist. Pictured: Hundreds of people queue at a one day pop up walk Covid site in the city centre, July 2[/caption]

But it is Scotland that has the highest infection rate of the four UK nations, at 423.2 per 100,000, followed by England (252), according to the Government dashboard.

Scotland is the only UK country to have seen case rates reach a new high, according to analysis by PA.

But this is partly because rates peaked at a much lower level in Scotland during the second wave than in the rest of the UK.

This is also why a large number of local areas of Scotland are now above their second-wave peak, including Dundee where the rate is currently 899 – the highest anywhere in the UK.

Wales currently has the lowest rate of the four nationals (116.9) and Northern Ireland’s is 130.6.

Figures show that the UK now has the highest number of new cases per day than any other country in Europe.

Most other nations are now starting to see an uptick in cases.

But the UK also has high vaccine rates – with almost two-thirds of adults double jabbed.

It only falls behind Malta for the number of doses given relative to population size.

This means the soaring cases should not be translated to hospitalisations and deaths – although these are very slightly rising.

Scotland now has the highest case rate of all European nations, according to the national clinical director. 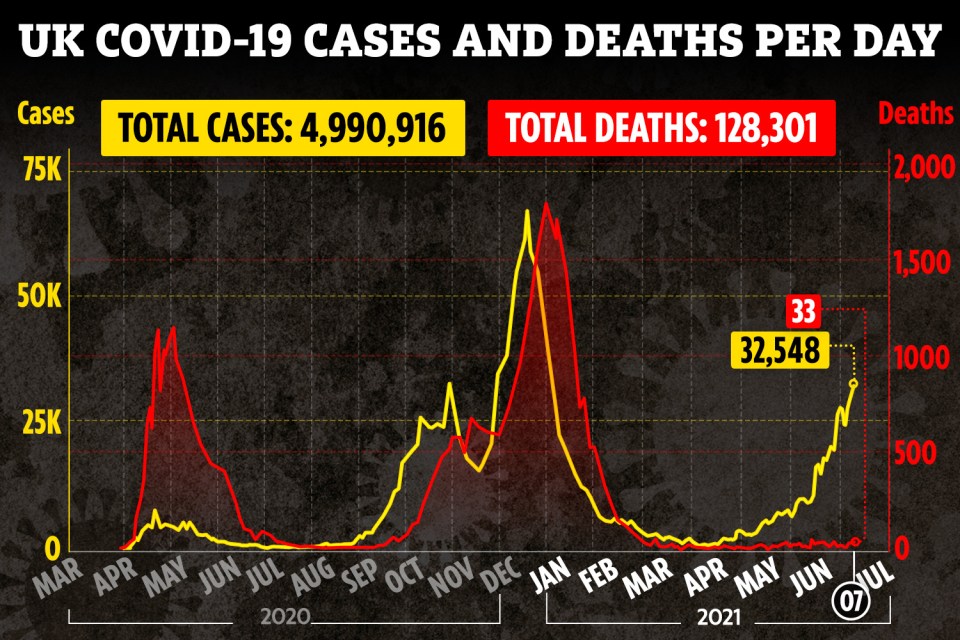 
Covid infections 'could hit 120,000 a day by Freedom Day as cases quadruple'

More data from the World Health Organization shows that six health boards in Scotland are among the 10 worst-hit areas in Europe.

Scotland is expected to move to “level zero” on 19 July, with all remaining legal restrictions lifted on 9 August – however, Nicola Sturgeon has said the planned dates were not “set in stone”.