AN ANCIENT banquet hall dating back to the time of Jesus has been opened to the public in Jerusalem.

The amazing find was discovered near the edge of Jerusalem’s Temple Mount, an important holy site recognised by Judaism, Christianity, and Islam for thousands of years.

The site is thought to have hosted important religious guests[/caption]

Thought to be built within Christ’s lifetime, archaeologists think the structure was used to host “VIPs” before they visited Temple Mount.

It’s made up of two chambers and a fancy hallway that would have had water fountains cascading from columns.

Shlomit Weksler-Bdolach directed the excavation for the Israel Antiquities Authority.

She said: “This is without doubt one of the most magnificent public buildings from the Second Temple period that has ever been uncovered outside the Temple Mount walls in Jerusalem.

“The building, which apparently stood along a street leading up to the Temple Mount, was used for public functions.

“Without doubt one of the most magnificent public buildings”

“It may even have been the city council building, where important dignitaries were received before entering the Temple compound and the Temple Mount.

“Visitors to the site can now envisage the opulence of the place: the two side chambers served as ornate reception rooms and between them was a magnificent fountain with water gushing out.

“We believe that the guest rooms, which were also used for dining, contained wooden reclining sofas that have not been preserved.”

It’s thought guests would have reclined and feasted on the sofas just like the Romans and the Greeks did.

One of the chambers was discovered in 1867 but the second and the conjoining hallway were found by modern archaeologists.

The archaeologists say the building was later divided into three and a pool or ritual bath was added to one.

“Here visitors will view fascinating finds and walk for the first time along the entire route among Second Temple-period remains that illustrate the complexity of Jewish life in Jerusalem.” 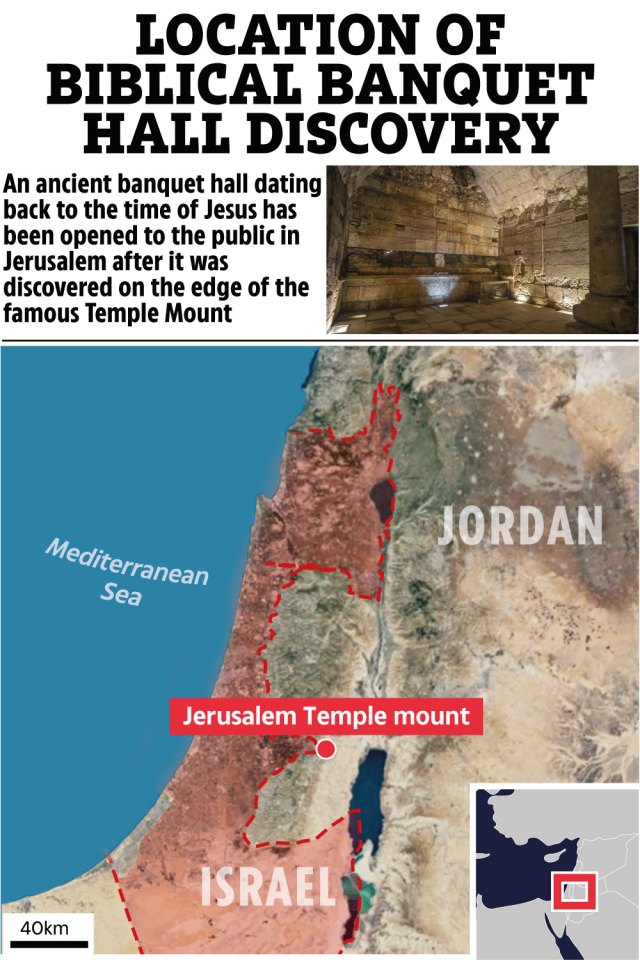 
Moon 'wobble' could cause mass FLOODING across Earth, scientists warn


Owners should get their cat’s CONSENT to pet them, experts say

EYES TO THE SKIES


You can see the Moon, Mars and Venus in a line with NAKED eye tonight

In other archaeology news, the remains of the oldest known shark victim have revealed that he died 3,000 years ago after his leg was bitten off.

A mysterious tomb just a few miles from Dublin is older than the Pyramids of Giza and continues to baffle scientists.

And, the first humans to set foot on the North American continent could have arrived 30,000 years ago, according to new evidence.

Hard-left captured Unite the Union and the workers have suffered, says Gerard Coyne

What is ZMA Good for?

Lateral flow tests: How to use, order and report results