Nearly half of schoolkids don’t eat breakfast in the morning leaving them hungry, study finds

Nearly half of school age children in the UK don’t eat breakfast every day – leaving them hungry by 9.36am.

A study of 2,000 6-16 year olds and their parents, found 43 per cent of children in this age group do not start each day with a full stomach.

A study of 2,000 6-16 year olds and their parents, found 43 per cent of children in this age group do not start each day with a full stomach[/caption]

Mums and dads aren’t in a much better position, with 37 per cent missing the first meal of the day and getting hungry by 9.54am.

The research was commissioned by New York Bakery Co. to announce its partnership with Magic Breakfast, which will see them work with chef Gizzi Erskine on the ‘Make Mornings Magic’ campaign to offer nutritious and budget friendly recipe ideas and tips to help with breakfast.

Christina Honigfort from New York Bakery Co. said: “We all know how important breakfast is, yet up to 4 pupils in every class of 30 are at risk of starting their school day too hungry to learn – which has a potentially detrimental impact on their futures.

“The past year has highlighted the scale of the problem even further, with a devastating effect. We welcome all the work that is happening across the world of grocery and beyond to tackle food poverty.

“Donating half a million bagels to children who need them most is our way of stepping up our support as well as highlighting the scale of need and joining calls for urgency in solving the issue.”


Girl, 16, 'loses fingertip' at Reading Festival after getting stuck in barrier

Emily Wilkie, Head of Fundraising at Magic Breakfast, said: “Prior to the pandemic, as many as 1.7 million children in the UK were at risk of hunger  and we need to act now.

“The effects and benefits of a healthy breakfast truly are magical and can be life-changing and we’re very thankful to New York Bakery Co. for helping us work to ensure no child in the UK starts their school day too hungry to learn.”

The study also found that despite skipping breakfast, more than three quarters of mums and dads believe it’s the most important meal of the day – as do three in 10 children.

Top reasons for missing breakfast included finding it too early to eat (43 per cent) and not getting out of bed early enough (14 per cent).

Similarly, more than half of parents admitted they struggle to get their children to eat the first meal of the day because they wake up too late (42 per cent), they say they’re not hungry (50 per cent) and they are fussy eaters (36 per cent).

Additionally, we know that youngsters in London are most impacted by not eating breakfast, with 38 per cent of them feeling easily distracted and a further 31 per cent feeling grumpy. 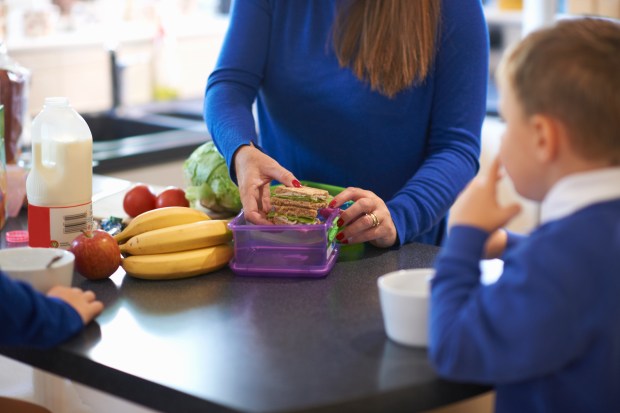 1. Starting the day with a full stomach can really help a child’s concentration and protein will help your family feel fuller for longer.

This makes it an essential part of a balanced breakfast. Good ways of getting protein into your breakfast include eating peanut butter, eggs, cream cheese, bacon, or ham.

A bacon and egg sandwich in a toasted bagel is a great way to get a big protein hit in the morning.

2. My second tip is to avoid refined sugar as much as possible. High sugar cereals create big spikes in blood sugar which then puts demands on the liver and also affects glucose and insulin levels, which are responsible for all kinds of health problems and obesity in children.

Porridge is a brilliant, affordable and delicious breakfast, and for children that enjoy sweeter options, you could try a wholemeal bagel topped with unrefined sugars such as sliced banana and honey.

3. Fruits contain fibre, vitamins, minerals and a whole host of micronutrients and these are really important to include in your family’s diet. It is much more nutritious to eat fruit whole rather than in a juice or smoothie.

Eating a few nuts and seeds at the same time as fruit is great as it helps lower GI levels – the measure of how quickly blood sugar levels rise after eating – as the body has to work harder to digest it.

Chopped up apple, pear, banana or soft fruits like blueberries, raspberries and strawberries eaten with a few nuts are great additions to any breakfast.

Additionally, we know that youngsters in London are most impacted by not eating breakfast, with 38 per cent of them feeling easily distracted and a further 31 per cent feeling grumpy.

In addition to donating 500,000 bagels to the charity to reach schoolchildren most at risk of starting their day hungry, New York Bakery Co. is supporting Magic Breakfast’s mission to raise awareness of child hunger in the UK and join the fight to end childhood hunger for good.

Magic Breakfast supporter and chef, Gizzi Erskine, is backing the campaign with an exclusive magic-themed, budget-friendly and healthy breakfast idea and tips.

Gizzi Erskine said: “My Magical Rainbow Fruit Salad bagel is quick, low cost and packed with healthy ingredients to help provide children with the nutrition they need every morning.

“We also have a range of top tips for a budget-friendly, nutritious breakfast, from kickstarting the day with a protein boost to fibre-packed fruit.

“Every healthy choice helps in ensuring that everyone can have a more magical morning, especially when this can have such a positive impact on the day ahead.”

Who is Rory McIlroy’s wife Erica Stoll, and how many children do couple have?

Woman, 25, worth £230k shares budget meals which cost less than £3 a serving & supermarket hacks to save a fortune

What time is the SpaceX Inspiration4 launch today?