The 9 Best Secure Messaging Apps In 2021

Data protection is a hot topic this year. To ensure your data and privacy aren’t exploited, sophisticated systems are crucial for the private life and business life alike. Check our list for the currently most reliable communication apps and keep yourself and your career secure.

The constant scandals around social networking sites and messengers such as Facebook and WhatsApp have fostered applications such as Telegram and Signal. Now, Blockchain alternatives are stepping into the spotlight adding another layer of technology to encryption apps like Telegram are infamous for. 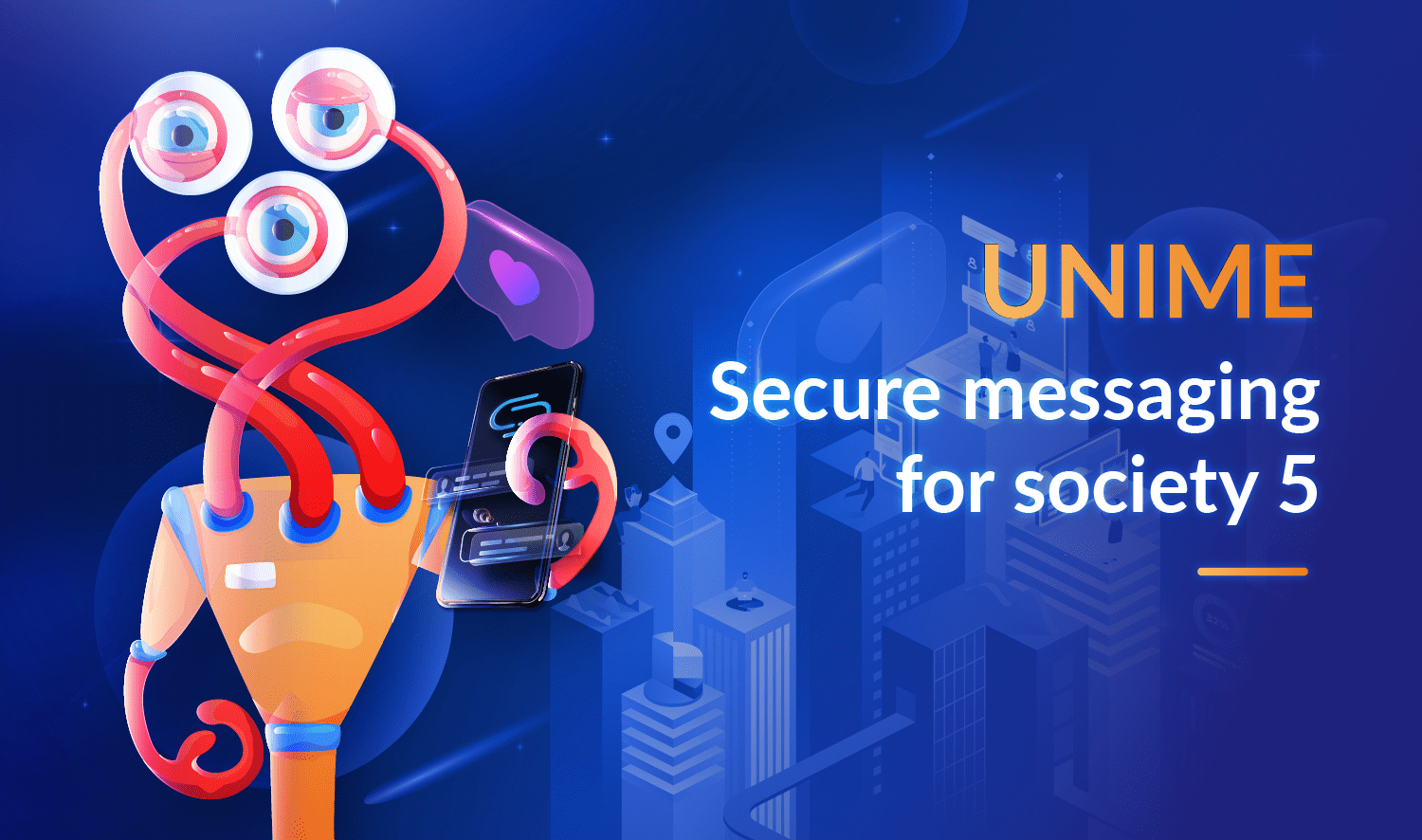 We will start this list off with an underdog. Relatively unknown, the Singaporean company UniWorld.io gives off an unusual impression. UniWorld.io products are built in a very pragmatic fashion with a  “safe-by-design” concept and globally marketed.

Their chat app, UniMe, has various in-built mechanisms such as auto-deletion of messages and data to provide users with foolproof security. On top of that, the app comes with custom AI chatbots and a decentralized immutable database by utilizing blockchain technology.

UniMe’s unique selling point, alongside the high security standard, is the feature to build a custom chatbot. This allows the customer to automate tasks and communicate in a unique way. It has also recently added a crypto wallet featuring BTC, it’s native token UNW and other coins.

The Dust Chat App was one of the market’s first blockchain-based messaging applications. Created in Los Angeles in early March 2014, this encryption app has since garnered significant media attention thanks to the support of celebrity and supporter Mark Cuban.

Dust’s unique feature is that messages are automatically deleted or “dusted” within a 24 hour timespan for both sender and recipient.

Cryptviser is a blockchain based messenger system specialized to counter MITM (man-in-the-middle) attacks. They achieve this by replacing the traditionally centralized database with a particularly decentralized one.

Mark Babbitt, CCO of Cryptviserwhat, stated in an interview with the App Developer Magazine that his company focuses on giving ordinary people the same degree of safety that high-level companies and governments alike enjoy. He emphasized the increased demand for personal privacy.

The Echo Messenger uses the Graphene Blockchain to offer you a safe and private messaging experience.

It can transmit multimedia messages to all voice/video streams with real-time encryption. Echo’s technology is decentralized. Users can also make crypto payments through the app.

Christoph Hering, CEO of Echo, revealed in a recent interview that Echo uses an interplanetary file system protocol (IPFS) that has been specifically developed to enable faster communications. Instead of the conventional HTTP protocol, IPFS uses a content-orientated system.

Blockchain-based messaging applications traditionally need the recipient and sender to access the blockchain, which can be resource-intensive. Echo cuts these costs and provides increased security using its IPFS client.

Like Echo, the E-Chat messenger also provides IPFS technology and peer-to-peer chatting. There is no central storage place for your data, everything is hosted on a plethora of computers after being encrypted.

It’s this decentralization that removes security weak points prone to assaults via MITM. Aside from that, E-Chat features a content producing tool that hands out tips. The feature is called “Crypto-like” and can be found in the content producer area of the site, where users may also establish subscription channels.

The platform also features an integrated payment mechanism so users can use both NFC and QR to send and receive contactless payments. The funds can be FIAT as well as cryptocurrency. It also has a built-in crypto conversion platform that allows you to exchange a variety of crypto coins and tokens straight from your phone. To unlock the app, the user can rely on a fingerprint scanner, facial recognition, or a secret key.

Telegram has garnered a lot of attention after raising a staggering $1.7 billion through its first Initial Coin Offering (ICO).

Recently, Telegram offers to store your passport data. Telegram hopes to keep your most sensitive and confidential documents on their encrypted and secure blockchain network. They also use end-to-end encryption, and thanks to the apps architecture, even authorities don’t have access to your data.

Status uses the well-established Ethereum blockchain to guarantee that information of its customers stays secure from prying eyes. The platform provides all messages with end-to-end encryption. You may also explore a wide variety of decentralized applications (Dapps) through the platform’s built-in browser.

Status users have numerous unique features at their disposal including decentralized employment, trade, data prediction, and identifying services. For example, the technology enables artists to safely advertise and distribute their work on the Ethereum blockchain.

The famous South Korean chat application Kakao Talk has also entered the blockchain market through its subsidiary, Ground X, which is currently in development. Kakao is presently the biggest messaging app in South Korea with a 94 percent market share.

The creators of Ground X chose Japan as their home base for its advanced crypto legislation despite their dominance over the South Korean market. The developers did not provide more details about integration, but experts are monitoring these developments closely.

The Vibeo platform offers customers a more substantial messenger app than the competitors when it comes to video streaming. The key features include three-way video calling, sharing your screen, sharing your location. and attaching notes to conversations.

Why Should Your Business Care About This?

Nowadays, it’s a given that businesses are:

Why we need chatbots

Chabots have become a rising trend. According to Facebook IQ research:

Chatbots are ready 24/7 with no pay and can be programmed to answer in every language.

In the past several years, the machine learning industry has changed. Artificial intelligence has grown considerably more than expected and is poised to take over virtually every sector through services such as GPT-3. AI can code, write content, classify documents, and even teach itself to increasing degrees. Some more examples include: the identification of fraud cases, predictive analysis and illness diagnosis, foreseeing customer churn and much more.

Although AI is currently used by hundreds of companies worldwide, its capabilities have not yet been fully implemented. AI has become increasingly smarter and versatile causing many jobs to become redundant whilst creating new positions centered around the development, supervision and use of AI tools.

Most of the accessible data is unstructured, chaotic and needs to be cleaned and organized before it can be used to instruct bots. This problem is to be dealt with by future bots with enhanced cognitive capabilities able to treat the data or handle it raw.

The needs of blockchain

The majority of ready-to-use services based on Blockchain are restricted solely by an inadequate corporate trust. Despite claims of decentralization and security, the data is still in the hands of a selected few.

That being said, with the right design, blockchains can be far more secure and reliable than traditional ledgers and eliminate the need to trust the other party in transactions or needing a custodian.

Do you have to wait for some fantastic new technology from one of your competitors? If you always dreamt that you create (and send it to the bottom of the Atlantic) your own Titanic, sure. Suppose you are ready to plan for the future, no.

Messengers are fighting for market share. It will be up to the most dominant in the industry to divide the market amongst themselves, but unique features will tip the scale and even give underdogs a chance to secure a share. While WhatsApp is dominant in Europe, Kakao is in Korea, and Line in Japan showing the difference in regions.

Blockchain technology has left the spotlight, but continues to be used in many industries including the messenger market. There are many options when considering a messenger, even just among the blockchain-based privacy apps.

As large-scale hacks continue to make headlines globally, the encryption sector is expected to continue to see growth in the coming years.

The initial White paper from UniMe discussed this change in communication. Their aim is to develop a completely secure peer-to-peer data transmission tool that would enable data to be transferred directly from one party to the other without requiring the data to be kept.