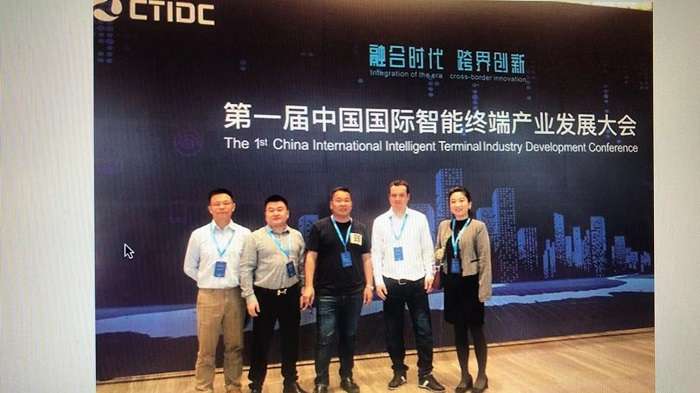 In an effort to take technology to the next level with cross-border cooperation, Yibin, a city of Sichuan, hosted the First China International Intelligent Terminal Industry Development Conference on May 9th, 2021.

The theme of the conference was “Integration of Era & Cross-Industry Innovation.” The conference was attended by hundreds of intelligent terminal industry scholars and experts from across the country and beyond to share their views and raise concerns.

A panel of four judges presided the conference including, Jolann Tianyu Jiao from Mexico, Jinsheng Zuo from China, Gerson Odell from Brazil, and Pawan Sharma from India.

Jolann Jiao, the founder of Q-Touch, one of the renowned electronic companies in the United States and beyond, closely monitored all the sessions. She shared her million-dollar views and reviews with the attendees, enhancing their knowledge and providing solutions to the long-standing issues that are prone to create obstacles on the way to progress and success.

Organizers of the Conference

The China Institute of Communications and the China Academy of Information and Communications Technology organized the CTIDC conference to promote exchange and cooperation in the intelligent terminal sector.

Who Were Invited to the Conference?

Some of the top-notch companies in the telecom communication industry worldwide were called over to exchange their valuable standpoint in sector development, hardware design, software requirements and 5G related projects.

A number of forums comprehensively covering topics related to 5G technologies and smart cities were also held during the conference, attended by leading chip, real estate, and terminal companies from over 40 different countries.

Additionally, the latest achievements in the intelligent terminal sector, such as smart transportation, smart buildings, smart communities, and smart homes, were also showcased throughout the conference.

Jolann Jiao was among the four judges who were invited from different parts of the world to oversee and spearhead the conference, given that she has in-depth experience in the industry, which makes her one of the most competent individuals as a judge.

Besides overseeing various activities at the conference, she also assisted with shortlisting candidates based on their unique ideas and creativity for The Peace Dove Award.

The crux of awarding candidates with the Peace Dove Award lies in bringing to the table the latest design on how intelligent terminals adapt to 5G applications. Also, to switching smoothly to 5G in an effort to make the innovated lifestyle possible and effortless.

CTIDC mobile competition was organized during the conference to recognize their efforts and designs that were displayed in the great hall. Candidates participated in the event from Mexico to India, Africa, Russia, and Brazil.

There were a number of keynote speakers at the conference who shared their views regarding the conference and intelligent terminal technology. Some of the sayings are as under;

He also mentioned that “With the blossoming internet of things and artificial intelligence industries, the intelligent terminal sector has ushered in a new era of development,”

First and foremost, like-minded individuals shared the hall. They exchanged their views to make this society, city, and the world as a whole a better and more convenient place to live in, which will be having far-reaching positive consequences. Subsequently, there were various contracts and agreements signed between multiple organizations and Yibin.

It is to mention here that Yibin has signed 153 intelligent terminal projects with companies such as ZTE and Konka.

Personalities like Jolann T. Jiao, who have immense experience and potential to propel a change in society by inspiring people, attended the conference. They shared their standpoint on how the whole process could be made smooth and seamless by educating the youth more on intelligent terminal technologies and also shed some light on the positive outcomes that our society can cherish once the technology is fully accepted, exercised, and incorporated.

Organizing such conferences in other cities and countries while inviting inspirational personalities who went above and beyond to make their dreams come true, just like Jolann T. Jiao, will have a positive impact on the minds of today’s youth. And these conferences will prove to be a stepping stone towards a better future and safer world.

The 10 top holiday destinations for Brits in 2022

Carer, 36, breaks down in tears as she finishes final shift after losing job for refusing Covid vaccine