YOU’RE more likely than usual to crash your car or keel over from a heart attack this weekend.

That’s because on Sunday Brits will turn our clocks back an hour to end daylight saving time, while the US will follow suit a week later. 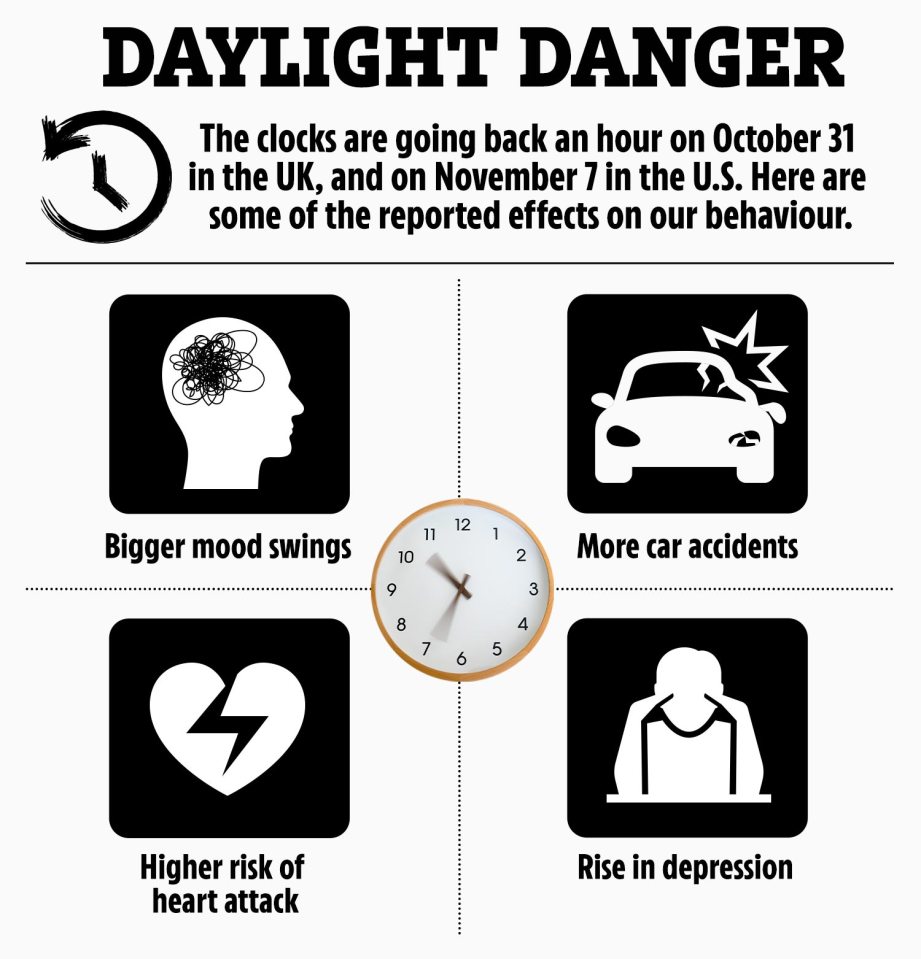 According to research, the resulting change to our body clocks can wreak havoc on our brains and our health.

In both spring and autumn each year, the clock change impacts our circadian rhythm – the natural, internal process that regulates our sleep cycle.

“While the ‘fall back’ technically equates to a potential extra hour of sleep, the reset isn’t so easy for our internal clocks,” Dr Joseph S. Takahashi, a neuroscientist at UT Southwestern who researches circadian rhythms, wrote last year.

“In fact, this twice-a-year desynchronization of our body clocks has been linked to increased health risks such as depression, obesity, heart attack, cancer, and even car accidents.”

Every cell in our bodies keeps track of time, and changes to our daily patterns can alter how our cells function.

According to Dr Takahashi, this can trigger stress in our brains and cause sleep deprivation, disorientation and memory loss.

It can also lead to difficulties with social interactions and learning.

The theory is backed up by research, although the degree to which sleep deprivation affects our health remains a hot topic of debate among scientists.

Multiple studies have shown, for instance, that the start of daylight saving time in the spring leads to a small increased risk of heart attacks.

In 2014, researchers at the University of Michigan found a 24 per cent spike in the number of hospital admissions for cardiovascular disease the Monday after we “spring forward”.

It’s thought that the stress of starting a new work week coupled with a disruption in people’s sleep pattern is the culprit.

The effect is reversed in the autumn, with the number of heart attacks decreasing slightly as people get a little extra shut eye.

As well as heart attacks, stroke rates are eight per cent higher in the first two days following both time changes.

The change impacts our mental health, as well as our physical health.

Hospitals report addressing 11 per cent more depressive symptoms after the autumn time change, according to a 2017 study.

The international team of scientists behind the research concluded that distress associated with the sudden advancement of sunset was responsible.

That may also be the driving force behind a rise in mood swings around this time associated with seasonal depression.

Research has additionally shown that car accidents increase six per cent in the mornings directly after a clock change.

While the degree to which daylight savings time effects our health and behaviours are small, the vast number of people they impact has led to calls to abolish it.

Last year, the American Academy of Sleep Medicine (AASM) claimed that public health and safety would benefit from eliminating the practice.

“Daylight saving time results in more darkness in the morning and more light in the evening disrupting the body’s natural rhythm.”

In other news, Elon Musk is worth a quarter of a TRILLION dollars after Tesla’s stock price shot up this week.

Star Trek’s William Shatner, 90, became the oldest astronaut in history after a trip on Blue Origin rocket earlier this month.

Nasa is gearing up to launch a spacecraft that will crash into as asteroid as part of a trial of a new planetary defence system.

And, check out the wildly impressive Panasonic 65HZ1000 TV, which makes most tellies look rubbish.

Getting the message: The future of SMS marketing

Shopper sparks fierce debate after sharing snap of her organised pantry – so do YOU see what the issue is?

What are the symptoms of E. Coli and how can it be treated?

NHS workers should be required by LAW to get Covid vaccine, says ex-Health Secretary Matt Hancock