Brits face restrictions if Covid spirals as Sajid Javid warns of 100k cases a DAY and says: ‘we won’t hesitate to act’

BRITS were tonight given grim government warnings that Covid cases could reach 100,000 daily – and told that ministers “won’t hesitate to act”.

Sajid Javid dangled the bleak prospect of tough winter restrictions like masks, working from home and vaccine passports to blunt another spike. 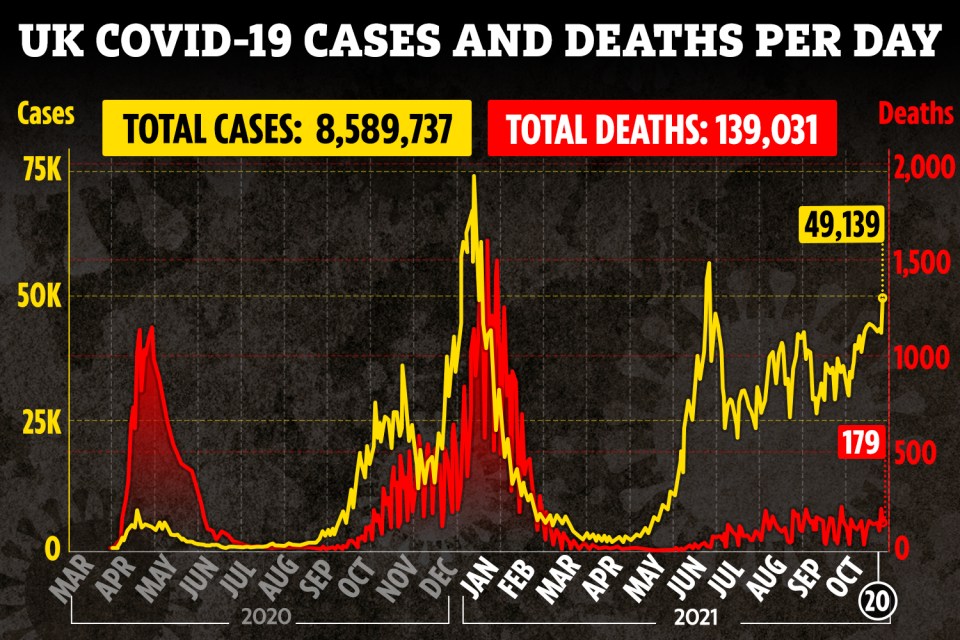 The Health Secretary said Plan B contingency measures won’t be brought in “at this point” and begged Brits not to “blow it”.

But he opened the first Covid press conference in weeks with a sobering warning: “We’ve always known that the winter months would pose the greatest threat to our road to recovery.”

Mr Javid feared that hospitalisations – the key factor that could tip the balance towards restrictions – could spiral to 1,000 a day.

He used a Downing St briefing to urge those eligible to get their booster jabs to top up their antibodies.

The top Tory said this was “not just to save lives, but to keep your freedoms too.”

Both he and Boris Johnson have backed The Sun’s Give Britain A Booster campaign amid concerns of low take-up rates and waning immunity.

Fears of fresh restrictions have grown in recent days amid a surge in Covid cases, hospitalisations and deaths – which yesterday reached their highest since March at 223.

NHS chiefs have called on ministers to enact their Plan B toolbox of contingency measures to supress a seasonal surge.

Mr Javid resisted their demands but in a stark warning to the nation he said: “Deaths remain mercifully low, but they are still sadly over 100 a day.

“This pandemic is not over.

“Thanks to the vaccination programme, yes, the link between cases and hospitalisations and deaths has significantly weakened, but it’s not broken.

“So we must all remember that this virus will be with us for the long term, and that it remains a threat.”

Top boffin Jenny Harries added that infections, hospitalisations and deaths are all “moving in the wrong direction”.

Mr Javid warned: “We’ve come so far, thanks to the efforts of so many. But with winter ahead, we can’t blow it now.”

He added: “We’ve always known that the winter months would pose the greatest threat to our road to recovery.”

The PM has so far resisted pushing the panic button and tonight Mr Javid instead gave a rallying cry for people to get boosters.

Frontline workers and the most vulnerable are currently being called forward for their boosters, to be followed by over-50s in age order.

Over-50s who had their second jab more than six months ago are eligible and are being contacted by the NHS to book slots.

Waning immunity has spooked scientists and a fresh advertising blitz for boosters is launching at the end of this week.

Mr Javid said: “Ever since our phenomenal vaccine rollout began last winter, we’ve been in a race.

“A race between the vaccine and the virus and although we’re ahead in that race, the gap is narrowing.

“We’ve come so far, thanks to the efforts of so many, but with winter ahead we can’t blow it now.”

‘NO PLANS’ FOR PLAN B

Mr Kwarteng this morning said plunging back into lockdown would be “completely wrong” and take a sledgehammer to the economic recovery.

Downing Street have also insisted there are “no plans” to enact their Plan B just yet.

Mr Javid said: “If we all play our part, then we can give ourselves the
best possible chance in this race, get through this winter, and enjoy Christmas with our loved ones.”

This pandemic is not over

Last month the PM said Plan B has “a number of different shots in the locker”.

He said: “You wouldn’t necessarily play them all at once, far from it, you would want to do things in a graduated way.”

The Government have not put a threshold on when Plan B would be launched, but reports have suggested 250 daily deaths is the top end.

Top doc Prof Stephen Powis said: “There is no one number that we would use to think about triggering interventions because it is more complex than that.”

Labour’s shadow health secretary said: “The so-called wall of defence against Covid is crumbling and today we needed a plan to rebuild it.” 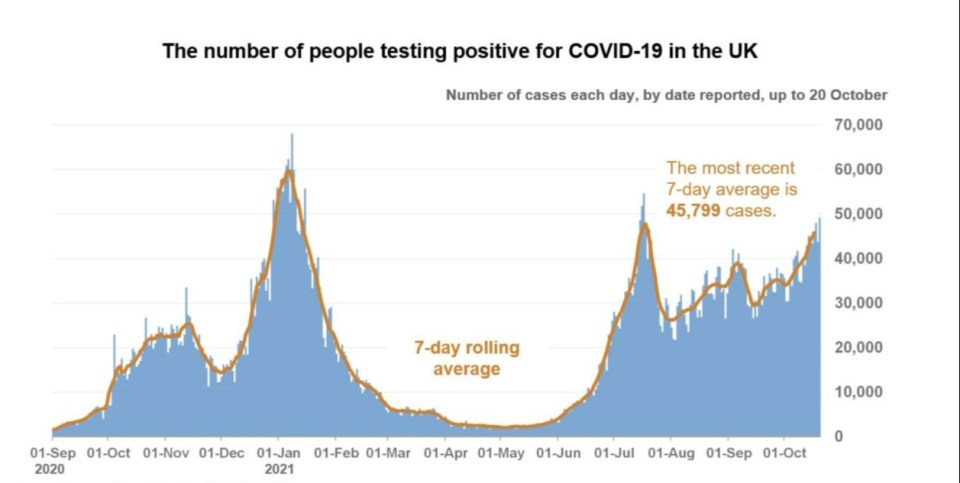 WHAT IS BORIS' PLAN B?

Boris Johnson's Plan B was announced last month as a back-up in case hospitalisations and deaths spiralled out of control as the country unlocked.

Since July masks haven’t been mandatory on public transport or in shops as they once were.

Britain is an outlier among European nations, many of which still require face coverings in crowded spaces.

Government guidance encourages Brits to wear them in enclosed settings – although they have the power to make them a legal requirement once again.

As recently as this month at Conservative Party Conference Boris Johnson was banging the drum for workers to go back to the office.

Over the past few months people have slowly been trudging back to their desks as Government guidance changed.

But Plan B includes provisions for ministers to once again hunker down at home and do business on Zoom.

Contentious vaccine passports have proved a thorny issue during the pandemic but could return under Johnson’s Plan B.

The prospect was all but killed by the PM before it was announced they’d be needed for nightclubs this month.

The u-turn was widely seen as a ploy to encourage more teenagers to get jabbed and was quietly ditched.

Some large venues such as sports stadiums are using Covid certificates as a voluntary measure.

‘Britain’s most disgusting home’ with a filthy toilet, piles of rubbish everywhere sells for eye-watering sum

Boris Johnson’s new plans for social care to hit poor and Northerners hardest – how will they affect you?