BORIS Johnson is not preparing to announce fresh Covid restrictions today despite summoning a crunch Cabinet meeting, The Sun understands.

The PM is hitting pause on a press conference after top ministers demanded more time to examine the latest Omicron data before signing off on any new curbs they fear will take a sledgehammer to Christmas.

Boris Johnson arrives at No10 today[/caption] 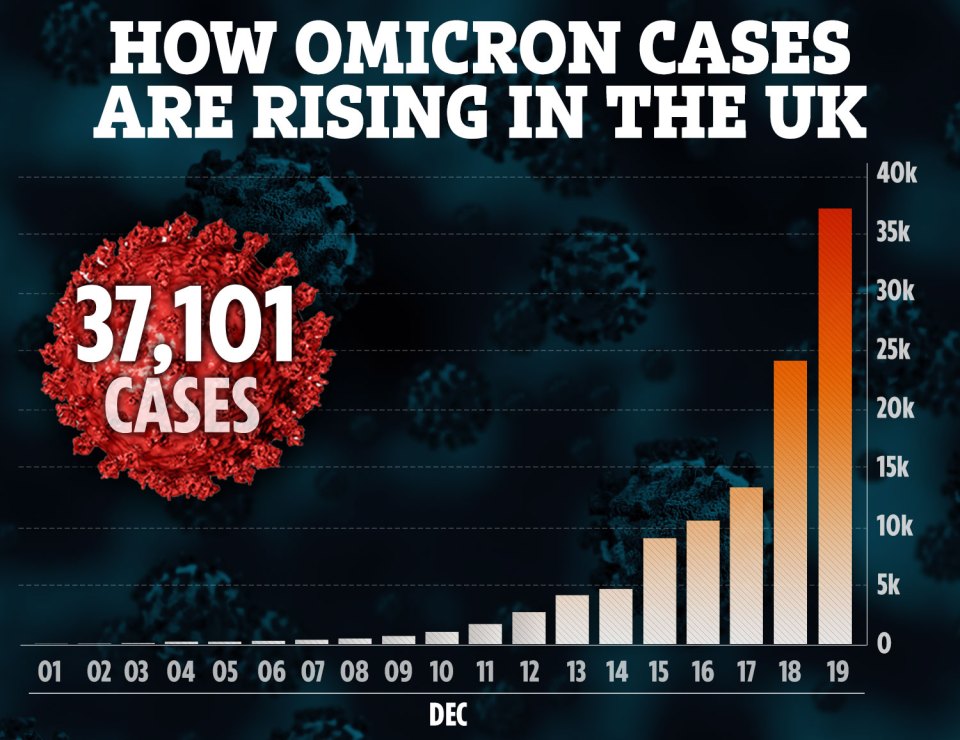 Prof Chris Whitty and Sir Patrick Vallance will this afternoon present a rare Monday Cabinet with sobering stats about the super-strain’s rapid spread.

Yet senior ministers don’t want to be railroaded into signing off another draconian squeeze without properly poring over the situation.

Rishi Sunak, Liz Truss and Kwasi Kwarteng are believed to be among the Cabinet bigwigs afraid of the impact on the economic recovery.

Businesses are begging the PM not to tighten the rules in their crucial Christmas period for a second year running.

But Dominic Raab this morning warned the situation was changing “hour by hour” in the biggest hint yet more measures were on the way.

The Deputy PM said there are no “hard and fast guarantees” more restrictions won’t be imposed by Christmas to tackle the Omicron tsunami.

He hoped family festivities would be better than last year’s lockdown – but said ministers would pull the trigger “earlier rather than later” if forced.

And he hammered the government’s plea that the best weapon in our inventory are vaccines by urging everyone to get their boosters.

Volunteers are signing up in droves to help out the campaign effort including the heroic recruits of The Sun’s Jabs Army.

The PM is so far resisting demands from doomster scientists to press the panic button and is standing firm with his two-pronged strategy of jabs and Plan B.

Mr Raab said this morning: “We will have a much better Christmas than last year because of the vaccination level, both the overall vaccination level but particularly the impact of the booster campaign, and we saw on Saturday, just in one day, 900,000 people get their booster.”

Yet he refused to calm the fears of millions that their Christmases will once again be wrecked by harsh measures.

Pressed on the likelihood of fresh curbs he said: “I do think that again, subject to the data, and it’s always under review, we’re in a better position to enjoy Christmas with loved ones this year.”

And he would not even rule out a fresh squeeze on Christmas Day, saying: “Well, I just can’t make hard and fast guarantees.”

Mr Raab said the variant is doubling every two or three days but “what’s less clear is what the severity is in terms of death and that’s because of the time lag.”

He added ominously: “We want to take informed decisions earlier rather than later.”

Gloomy scientists and politicians are demanding the PM acts now to stop hospitals being crippled with a New Year surge of patients.

The PM is understood to be mulling options to tighten the rules over the festive period.

But meanwhile he’s being pulled the other way by angry Tory MPs hell bent on stopping any new lockdown.

Downing St has promised to recall Parliament in the event any new restrictions are imposed.

Mutinous backbenchers are gearing up to vote against any more measures that would wreck the economic recovery and spread more misery.

Mr Johnson is also facing splits within his Cabinet, with Rishi Sunak, Liz Truss and Nadhim Zahawi understood to be against more measures.

One government source said: “Either we trust the vaccines work or we don’t. We need to move from pandemic to endemic. To save Christmas, SAGE needs stuffing.”


Schools could face disruption until EASTER because of Omicron

Things to consider when choosing a Flooring

Cavemen went on holiday in the Med more than 50,000 years ago to get some Ice Age sun, researchers find

Jawan Teaser: Shah Rukh Khan seen in a different ‘Attitude’, find out when the film will be released