DINOSAURS roamed the Earth for millions of years – until one day, 66 million years ago, an asteroid the size of Mount ­Everest struck the planet, bringing their almost instant annihilation.

Palaeontologist and Manchester University graduate Robert DePalma has spent years searching a prehistoric dinosaur “graveyard” in the hills of North Dakota in the US.

The fossil site – which he has named Tanis after the Egyptian city excavated in the Indiana Jones film Raiders Of The Lost Ark – may be 2,000 miles from where the meteorite hit in the Chicxulub Yucatán Peninsula in Mexico.

But Robert, who seems to style himself like Indiana Jones, believes the creatures were swept to their deaths in a tsunami, then entombed in sediment, which explains why they are so well preserved.

From the embryo of a flying pterosaur in its egg, to a dinosaur fossil that may have been killed on the day the extinction asteroid hit, we reveal the amazing finds the team unearthed. 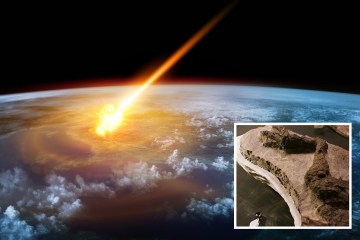 IT’S not just the discovery of fossilised animal remains that is adding to our knowledge of the period just before the dinosaurs died out.

Beautifully preserved footprints left by the prehistoric creatures are now being unearthed by Robert, and are also providing clues.

His team have discovered a number of footprints including one 30cm-long specimen that is believed to have belonged to a duck-billed dinosaur.

Robert says: “They would have been very common in the Cretaceous period. They ate the plants in the area and they got very large – 30ft long.”


I spent £50,000 on an extension but council is making me DEMOLISH it

NO HOPE TO NOU HOPE

One track is particularly well preserved.

Robert says: “You even see a nail print at the tips of the toes, so the little toenails dug into the mud.

Robert’s prized footprint features three toes and is longer than it is wide, so it is likely to belong to a carnivorous dinosaur.

Sir David said: “Hell Creek is well known for one carnivore in particular – T-Rex. This footprint is too small for an adult T-Rex but it’s possible it was made by a young one.”

ANOTHER exciting discovery made by Robert at Tanis is the crown of a tooth.

Sir David explains: “Its shape and serrated edge are indications it comes from an adult T-Rex.”

It was found lodged in the spine of a hadrosaur, a plant-eating dinosaur, proving that it hunted live prey.

FOSSILISED TURTLE IMPALED BY A STAKE

ROBERT and his team used ultra-cold liquid nitrogen to help free the complete fossil of a turtle.

It’s a heart-stopping moment but the team manages to get the specimen out in one piece.

Evidence points to the turtle having been impaled by a wooden stake – possibly a tree branch – as the impact of the asteroid caused a tsunami of destruction that swept across the planet.

LEG OF THESCELOSAURUS BELIEVED TO HAVE BEEN KILLED BY ASTEROID

Robert’s team found the leg of a thescelosaurus, complete with surviving scaly skin[/caption]

ROBERT and his team face a race against the clock to excavate a mass dinosaur graveyard.

A heavy storm is heading their way and if they do not move fast, precious evidence could be washed away – and lost for ever.

After hours of painstaking work, they are stunned to discover what is thought to be a one-of-a-kind specimen – the fossilised leg of a dinosaur that may have been killed on that fateful day the asteroid hit.

The leg, complete with surviving scaly skin, is later analysed by Professor Paul Barrett, head of Fossil Vertebrates at London’s Natural History Museum, who reveals it belonged to a plant-eating thescelosaurus.

He said: “This looks like an animal whose leg has simply been ripped off really quickly. There’s no evidence on the leg of disease, there are no obvious pathologies, there’s no trace of the leg being scavenged, such as bite marks or bits missing.

“It could well be that this was an animal that was there, being tumbled around, in its death throes in that river as a result of the asteroid impact.”

SKIN FROM A TRICERATOPS

Sir David looks at the skin of a triceratops[/caption]

TRICERATOPS bones are a relatively common discovery at the site in Hell Creek but recovering fossilised skin in good condition – as the team find on one specimen they unearth – is very rare.

Sir David says: “The size and the patterning of the scales, together with the age and the location of the rocks where it was found, strongly suggests this was from a triceratops.

“The brown colour contains traces of organic material, so it might even be possible from this to work out which pigments were in it.

“Finding and studying such well-preserved fossils helps palaeontologists build a much more detailed picture of how these creatures lived.”

PTEROSAURS were winged creatures that lived among dinosaurs – though they are not classed as dinosaurs themselves – becoming extinct around the same time.

Sir David says: “Male pterosaurs usually had crests, while the females didn’t, so crests may have been used in courtship displays.”

And we now have an indication where female pterosaurs laid their eggs, because evidence suggests one laid hers in the soft, sandy river bank at Tanis.

Paleobiologist Dr Victoria Egerton, a researcher and professor at Manchester University, discovers the shell is soft, like a turtle’s, and not hard like most dino eggs.

Very little is known about this type of pterosaur, the azhdarchid, and Dr Egerton says of the new discovery: “They were much more reptilian than bird-like and this can potentially tell us more about the environment these eggs were laid in.”

Sir David adds that the sandy soil at Tanis would have been just soft enough for hatchlings to dig themselves out.

Robert adds: “This probably had a wingspan of maybe 15ft. It’s easy to picture something like that hatching and later fluttering out, almost like a little bat.”

‘BULLET’ THAT KILLED THE DINOSAURS

SPECIALIST scans back in the UK reveal something remarkable about one of the tiny spherule particles found in some fish gills. It contains iron, chromium and nickel.

Robert says: “The abundance of the three all together matches what you’d expect to see in a meteoritic body. That doesn’t match what you’d usually have down here.

“This could be a piece of the Chicxulub asteroid.”

Professor Phil Manning, chair of Natural History at Manchester University, adds: “This could be a piece of the bullet that killed the dinosaurs.”

FISH THAT ABSORBED IMPACT DEBRIS FROM ASTEROID AND AMBER RESIN

AMONG the thick layer of rock at Tanis, Robert and his team find hundreds of fossilised fish whose gills contain tiny clay balls that suggest they died soon after the asteroid hit.

Known as ejecta spherules, they formed from rocks that were flung into the air by the impact of the asteroid before raining down and becoming trapped inside the fish gills.

Over millions of years, these tiny beads of molten glass have turned into clay, and Robert says: “They give us a fingerprint of where they came from.”

But to find evidence of what happened that day, he needs to find one that hasn’t turned to clay – so the team search for a spherule encased in fossilised amber.

Sir David says: “Anything covered by the resin would be frozen in an amber time capsule. A spherule preserved in amber could be analysed to see if it comes from the Chicxulub impact.”

ELL OF A TIME

Robert says: “Once you have that link and you know what impact affected Tanis, then you essentially know that everything buried in those sediments are linked to the last day of the Cretaceous.”

IN his battered brown fedora and khaki shirt with a sheathed dagger hanging from his belt, dinosaur hunter Robert DePalma is every inch the modern-day Indiana Jones.

The 40-year-old paleontologist has spent much of his adult life digging for answers on the apocalypse that wiped out the prehistoric creatures 66million years ago.

Born in Florida, DePalma inherited a ­fascination with bones and teeth from his orthodontist dad and great-uncle Anthony, an orthopaedic surgeon and the father of renowned film director Brian DePalma.

As a three-year-old, Robert would examine bones left after family meals. When he was given a fragment of dinosaur bone at the age of four, he showed it to Anthony.

“He taught me all those little knobs and rough patches on a bone had names,” DePalma told the New Yorker. “I was captivated.”

A PhD student at the University of Manchester, he began excavating the North Dakota site Hell Creek in 2012.

Among his incredible finds there are a new species of dinosaur – the dakotaraptor – and the bones of dinosaurs that perished when a giant ­asteroid slammed into what is now the Yucatan Peninsula.

He shuns modern tools, preferring to dig with a World War Two bayonet given to him by his uncle, and dental tools donated by his dad.

After his latest finds at Hell Creek, and his collaboration with David Attenborough, the maverick dinosaur hunter could soon be the subject of his own Hollywood movie.

Time to give cousin Brian a call?

‘Prosecco at any time of day’: People share their favourite airport rituals