FRANCIS NGANNOU has warned Tyson Fury not to count him out if they do end up sharing the ring.

A hybrid boxing match between the UFC’s heavyweight king and the WBC champ could soon be on the cards following the pair’s promotion of the fight after Fury’s KO of Dillian Whyte at Wembley last month.

Ngannou’s chances of getting the better of the undefeated Fury have been written off by many, but the Cameroonian clubber is confident of handing The Gypsy King his first loss.

The Predator told The LadBible: “I think I can take everybody. Even the fact that I’m here, we are discussing about it, something will make sense.

“It’s just the proof that I can make it.

“He’s a great boxer. One of the best to ever do it. Personally, I think he’s a show guy. 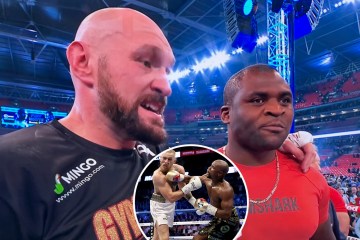 “He’s a good show guy. He likes to have fun. He’s cool. And what I love about him, he’s a free man. He speaks free. He lives free.

“Ten years ago, I wasn’t in the picture. Not even in the corner, like a dot. So I have my own chance.”

The fact Fury, 33, has run rings around all 29 of his career opponents hasn’t dampened Ngannou’s confidence.

PAUL ON THE TABLE

He said: “Obviously, it’s not my comfort zone. I know that he’s an expert in that discipline, but man, don’t never count me out.”

Ngannou, 35, is currently under contract with the UFC until December and recently snubbed their offer of a bumper £5million contract.

The UFC’s first African-born heavyweight champion is open to penning a new contract with the promotion, but only if they allow him to fight Fury.

During an appearance on The MMA Hour, he said: “The Tyson Fury fight has to be part of the discussion.

“If I sign another contract now, basically the same model of the contract, I’m screwed.

“That’s not happening ever. So we have to figure out a way to implement this into a contract.”