BORIS Johnson’s own cost of living tsar called for him to quit, The Sun can reveal.

David Buttress said the PM “just has to” go over the Partygate scandal.

The revelation is a huge embarrassment to No10 who announced only today that the former Just East boss was joining Downing St to advise on the flatlining economy.

In a tweet posted on January 11 , he said: “Why is it that the worst people often rise to the highest office and stay there?

“For me, it isn’t important what job you do or your title, but it is vitally important why you do the job and what you achieve.

“Boris has to go, he has to. You can’t survive judgement like this.”

He sent the tweet the day after the bombshell Partygate email revealed a top mandarin emailed guests to “bring your own booze” to a bash in the Downing Street garden.

The PM and wife Carrie were among 40 guests reported to have attended the garden gathering at the height of the first lockdown in May 2020.

In another post he accused Mr Johnson of “being fast and loose with the economy and the impact on the most vulnerable”.

And in another swipe he blasted: “Does anyone believe he would be PM on merit? Not a chance mate. 19 PMs from Eton.”


I was so jealous of my wife & Gemma, I needed counselling, says Michael Owen

Mr Buttress was brought in yesterday to offer Money Saving Expert style tips to Brits to cut their costs.

The PM himself welcomed him by tweeting “he will develop and promote initiatives that help households and families with rising costs”.

He wants retailers to follow Asda, Sainsbury’s and Boots in locking in their prices, and for firms to offer up more hardship funds.

And the new ‘Cost of Living Business Tsar’ will promote what cash help is available from the Government for struggling Brits on low incomes.

He said last night: “The rising cost of living that we are all facing, both in the UK and globally, provides business and industry with a unique challenge and opportunity to do our bit.”

Ministers say they have dished out £37billion out of help to deal with the crisis. 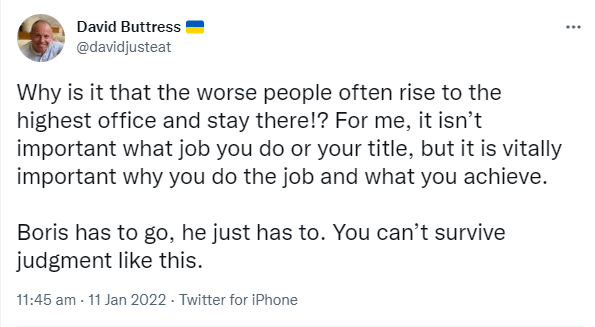 How do I report my Covid lateral flow test result and what happens if I test positive?