JUPITER is set to shine at its biggest and brightest this week.

If you’re doing a spot of stargazing on August 19 you should look to the Capricornus constellation to spot Jupiter at opposition. 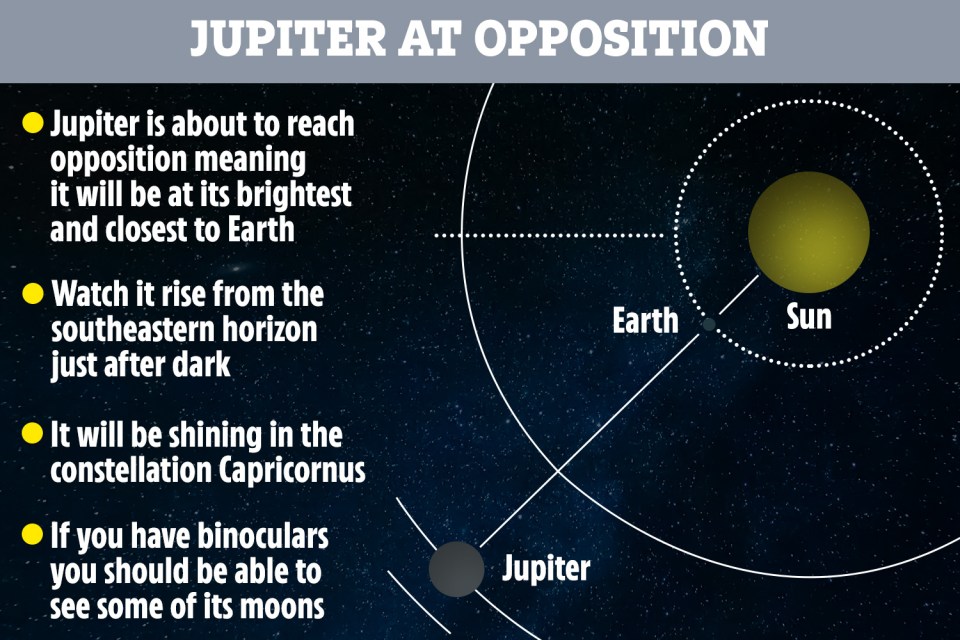 Jupiter comes into opposition around every 13 months.

Opposition happens when the Earth’s orbit sees it located directly between the Sun and another planet.

This Thursday evening, Earth will be directly between Jupiter and the Sun.

Jupiter will therefore look big and bright in the sky.

Jupiter comes into opposition around every 13 months so you should take advantage of the opportunity this week if you want to see it in its full phase.


Woman furious after neighbour calls her ‘selfish’ in parking row


Cop ‘killed son, 3, before killing himself after coming home from holiday’

How to see Jupiter at opposition 2021

In London, Jupiter will rise at around 20:30 BST and will be visible all night.

From New York, Jupiter will rise slightly earlier at 19:50 EDT.

You can check exactly what time the planet will rise in your location on In-the-Sky.org.

It will technically be at its closest point to Earth at 6am BST on August 20 but, weather depending, you’ll be able to get a great view in the late evening of August 19.

If you have binoculars you should be able to see Jupiter’s four giant moons.

One of these moons is called Europa and is said to have an underground ocean that could host alien life.

Jupiter is the largest planet in our Solar System and the fifth from the Sun.

It’s not a rocky planet like Earth and is known as a mega-gas giant.

In other news, an asteroid known as Bennu will pass within half the distance of the Earth to the Moon in the year 2135, scientists said Wednesday.

Gautam Adani became the fourth richest person in the world, know where Bill Gates and Jeff Bezos reached in the ranking

Why are ice creams with flakes called 99s?