AREA 51 is a highly classified US Air Force base which is surrounded by alien conspiracies.

The intense security around the base means no interior images have been made public but some facts about what has happened there have previously been revealed.

This is an aerial shot of the mysterious desert airbase[/caption]

Area 51 is located in the southern portion of Nevada, just 83 miles north-northwest of Las Vegas.

It’s an airbase that is commonly believed to be the home of the development and testing of experimental aircraft and weapons systems.

The US Air Force acquired the site in 1955, however, the CIA never acknowledged the existence of the facility until June 2013 following a Freedom of Information Act request filed in 2005.

The base has never been declared a secret base, but all research and occurrences in Area 51 are Top Secret/Sensitive Compartmented Information.


Punter gobsmacked at 'rip-off' £80 drinks bill – but others disagree


Teacher had sex with boy, 14, claimed she was pregnant & tried to pay him off

On the day of the event, 75 people showed up at the military base.

Matty Roberts, who started the event, wrote on the pinned post: “Hello US government, this is a joke, and I do not actually intend to go ahead with this plan. I just thought it would be funny and get me some thumbsy uppies on the internet.

“I’m not responsible if people decide to actually storm area 51.”

The US Air Force issued a strong warning to anyone actually thinking of trying to storm the site.

What actually happens at Area 51?

The base has been a testing ground for a host of top-secret aircraft, including the U-2 spy plane in the 1950s and later the B-2 stealth bomber.

Declassified documents say it was originally an area for the Army Air Corp pilots to practice their aerial gunnery.

During the Cold War, experimental aircraft, such as the high altitude U-2 spy plane, and weapons systems were tested there.

The current use of Area 51 is unknown and remains top-secret.

The patch of fenced-off land, measuring six by ten miles, is tucked between a US Air Force base and an abandoned nuclear testing ground.

It’s thought the US military continue to develop new aircraft there.

The airbase is suspected to have around 1,500 staff who are rumoured to commute from nearby Las Vegas.

American investigative journalist Annie Jacobson once told the BBC: “Area 51 is a test and training facility.

Why is Area 51 associated with aliens?

The secrecy about the airbase has drummed up a lot of rumours and conspiracies.

The site is associated with the ‘Roswell incident’, which is one of the most discussed and controversial UFO theories in history.

History.com calls the Roswell incident the “mother of all UFO sightings.”

In July 1947, a rancher found “mysterious debris” and soldiers from a nearby base came to collect the materials.

Then came a giant leap as newspapers reported that a “flying saucer” went down in the New Mexico city.

“Ever since, conspiracy theorists have been hard at work trying to prove the wreckage was extraterrestrial, with one man, Ray Santilli, going so far as to release a video in 1995 of an alien ‘dissection’ purported to have taken place after the incident,” according to History.com.

Santilli confessed in 2006 that it was a staged film, but said it was based on real footage.

The military sensationally announced in a press release it had found the remains of a crashed flying saucer in the desert.

But the following day it retracted the statement, saying it was in fact a damaged US Air Force air balloon.

In 1989, a man called Robert Lazar claimed to have worked on ‘alien technology’ at Area 51.

He also claimed to see photos of dead aliens.

There’s also a theory that all the alien conspiracies help to keep what’s actually going on at Area 51 a secret.

There are warnings and gates around the area[/caption]

Trespassing and photography is strictly prohibited[/caption] 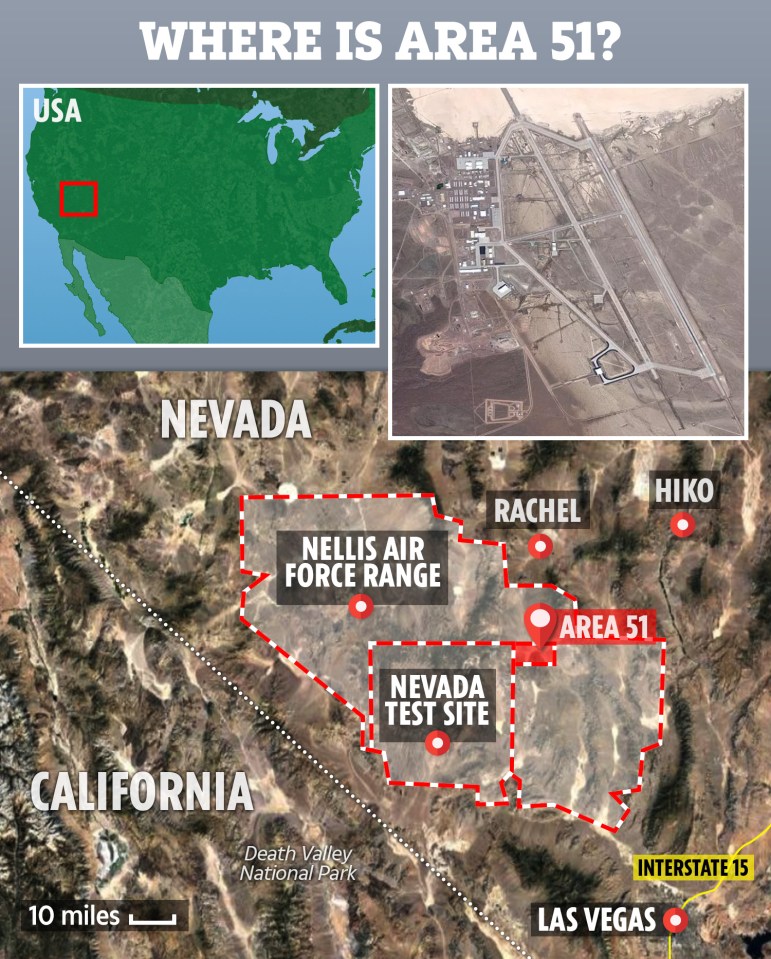 In other news, the US’s National Oceanic and Atmospheric Administration has been keeping its eye on a solar storm.

Nasa has announced that it is accepting applications for wannabe space explorers who wish to fire their names to the Red Planet.

Mars ‘was once like EARTH’ with lakes and oceans before collapsing into hell planet, Nasa scientist reveals