A HUGE asteroid is set to shoot past Earth this weekend.

Asteroid 3361 Orpheus is about three times the size of Big Ben and will head past Earth on Sunday. 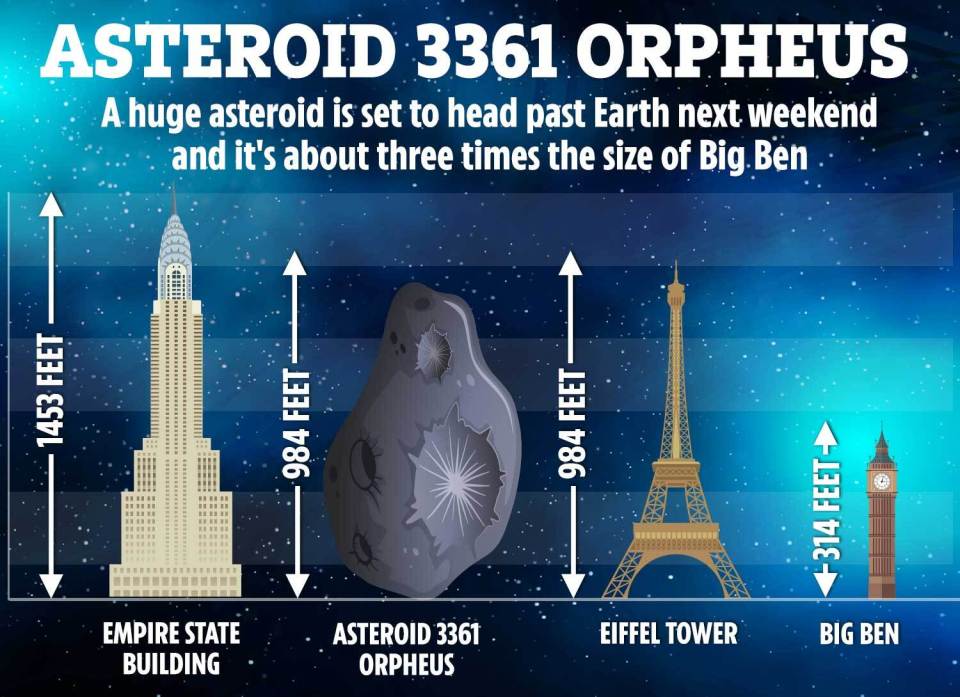 The large space rock is thought to be around 984 feet wide.

That would make it three times as large as London’s Elizabeth Tower, also known as Big Ben.

Nasa is keeping an eye on the asteroid, which has made it onto the space agency’s ‘Close Approach’ list.

There’s no need to panic though as the space rock should stay around 3.5 million miles away from Earth as it shoots past.

Nasa considers anything passing within 120million miles of Earth a Near Earth Object (NEO).


Terrifying 3.1-magnitude EARTHQUAKE rocks Scotland in the middle of the night


Police constable, 30, charged with raping and molesting a child under 13


Driver jailed for running over & killing mum, 38, after row over oral sex

Thousands of NEOs are tracked by scientists to monitor whether they’re on a collision course with our planet.

Any fast moving space object that comes within around 4.65 million miles is considered to be “potentially hazardous” by cautious space organisations.

One small change to their trajectories could spell disaster for Earth.

It should pass us around 7pm UTC on November 21.

In other news, a new Instagram hoax is trying to steal logins by faking a “copyright violation”.

Scammers are using Google Alerts to send out links to malware.

And, Windows 10 users are being told to update their PC to escape an ‘Eternal Darkness’ flaw.

Boris Johnson’s new plans for social care to hit poor and Northerners hardest – how will they affect you?