I’m a food expert, my easy hack to get your butter soft and spreadable in minutes & it won’t melt it completely

A FOOD expert has shared an easy hack to help soften butter and make it spreadable in minutes.

TikTok account Kroger, which can be found at @kroger, uploaded a video post, teasing: “This butter hack will be your new favourite kitchen hack.”

Showing the handy trick in action, the video continued to zoom in on a refrigerated block of butter that was too hard to spread.

The voiceover then says: “What if I told you you could soften your butter in just a few minutes?

They then continue: “This butter hack is life-changing.”

The clip then cuts to some boiling water being poured into a glass on the kitchen counter. 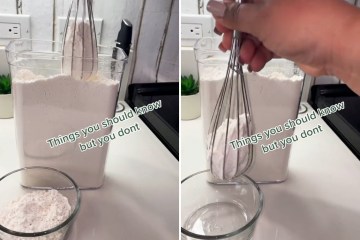 Opening up about the simple and fast hack, @kroger goes on to go through the steps one by one.

They went on: “Grab a large cup and fill it up with boiling hot water. Let it sit for a few minutes and then dump it out.

Once the water is removed from the glass, it’s time for the next step, which will see the butter transform in front of your eyes.

“Then place it over a stick of butter and wait around five minutes. And just like that, you have soft butter within minutes.”

Kroger’s 450,000 social media followers were quick to comment on the video, describing the method as “life-changing.”

One wrote: “Soooo convenient.” Another added: “This really does work. My microwave doesn’t soften butter without melting it.”

Is that you Ma’am?

Glastonbury moment goes viral as the ‘queen’ is ‘spotted’ in crowd

The 6 things you are wearing that make you look cheap, according to a fashion expert

A third said: “This is so smart.” A fourth was in agreement as they joined in the conversation to comment: “Genius!”

Finally, others said they were happy to have found a hack that makes the butter spreadable but doesn’t completely melt it.

First, take the butter out of the fridge[/caption]