BORIS Johnson will examine the Covid stats this week to decide over lifting restrictions on June 21, Matt Hancock has revealed.

The Health Secretary said it was “too early” to determine whether the Government would lift all coronavirus restrictions later this month.

Asked whether he had seen anything in the data that could delay reopening this month, the Cabinet minister told Sky News: “It is too early to make a final decision on that.

“The Prime Minister and I and the team will be looking at all of the data over this week.

“We have said that we will give people enough time ahead of the June 21 date which is pencilled in as the next step – which is to be not before June 21 – and the critical thing is to see whether the four tests we have set have been met.

“That’s in terms of the number of cases, and cases are rising slightly, the number of hospitalisations, which are much more flat.

“That’s because the third test, the rollout of the vaccine, is going incredibly well.

“Then, of course, we have to look at the impact of new variants and we have seen a very significant impact of a new variant – the Delta (also known as the Indian) variant – over the last month or so.”

Mr Hancock told the BBC’s Andrew Marr that the Government is “absolutely open” to delaying 21 June and “the roadmap was set up in order to take these sort of changes into account”.

The Health Secretary added that the Indian variant had made the decisions behind the June 21 unlocking “more difficult” as he confirmed the latest advice is that the so-called Delta mutation is 40 per cent more transmissible than the Kent variant.

He said: “That means that it is more difficult to manage this virus with the new Delta variant.

“But crucially, after two doses of vaccine we are confident that you get the same protection that you did with the old variant.

“So the good news is that the vaccine still works just as effectively. “Everybody must go and get their second jab though because the first isn’t as effective on its own.

“So ultimately it does make the calculation more difficult for June 21 but it doesn’t change our strategy which is we all need to go and get vaccinated and that way we will break this link between the number of cases to the number of hospitalisations.”

Meanwhile, the president of the Academy of Medical Sciences said that the next week will be “absolutely critical” in looking at data on infections in the UK.

Dame Anne Johnson, professor of Infectious Disease Epidemiology at University College London, told the Trevor Phillips on Sunday programme on Sky News: “We need more data and this next week is going to be absolutely critical in obtaining that data.”

She said there had been a “significant uptick” in the number of cases in the past week or two, adding: “What we need to understand is what the risks are of that setting off another wave of infection, and also how well we can do in controlling it so the data that come through in the next week are very important.”

The rules on social distancing after the final stage of lockdown easing have not yet been finalised, the Health Secretary suggested.

Pressed on whether people could be asked to continue to abide by some lockdown rules, such as continuing to work from home where possible, Matt Hancock said: “We consider all options and the way we have set this out is as follows.

“There are a series of things at the moment, restrictions on how you can live your life, that we’ve said will be part of Step 4 when we can take Step 4, which include, for instance, the rule of six and the fact there are still some businesses that are closed.

“As well as that we have four reviews into international travel, into certification and into social distancing, for instance, and we are concluding those reviews and doing that work at the same time.

“We haven’t yet set out the approach to social distancing after Step 4 and that is something we are working on with our scientific advisers. “We will be guided by the science, but ultimately it will be ministers who make these decisions.”

“Those aged under 30 will be invited to book their coronavirus vaccine jabs this week, Mr Hancock confirmed.

He said that vaccines had “severed but not broken” the link between a rise in cases and an increase in the number of people being admitted to hospital.

“The majority of people going into hospital right now are unvaccinated,” the senior Government minister said.

“This week we will be opening up vaccines to the under-30s and so we are getting a step closer to the point when we have been able to offer the vaccine to all adults in this country.

“Then, once we have got everybody having had their second dose, then you will get this protection that we are seeing at the moment among older people, you’ll get that protection throughout the whole adult population.”

There are reports that the June 21 Freedom Day may be delayed by two weeks.

Sources told ITV News that plans are being made to push it back to July 5.

Correspondent Richard Pallot said: “Government sources have again stressed that no decision has been made but I understand that in private other plans are being drawn up.

“If there was a two-week delay then in theory all over 50s would get a chance of a second vaccine.”

The Sun revealed yesterday how a secret plan is being worked on to delay lockdown lifting by two weeks.


Girl, 10, given 24 hours to live after doctors find brain tumour


Boy, 9, is UK's youngest ever crack cocaine dealer – and too young to charge

Ministers and officials are working on contingency plans to move “Freedom Day” to next month, as well as retaining distancing and limits on fans in stadiums – potentially plunging the Euros into chaos.

It comes after a Public Health England report showed people who tested positive for the Indian variant – also known as the Delta variant – were at 161 per cent more risk of needing hospital treatment within 14 days.

And experts warned the Indian Covid mutation could be 100 per cent more infectious than the Kent variant, which caused the country to lockdown in January.

Four tests to ease out of lockdown 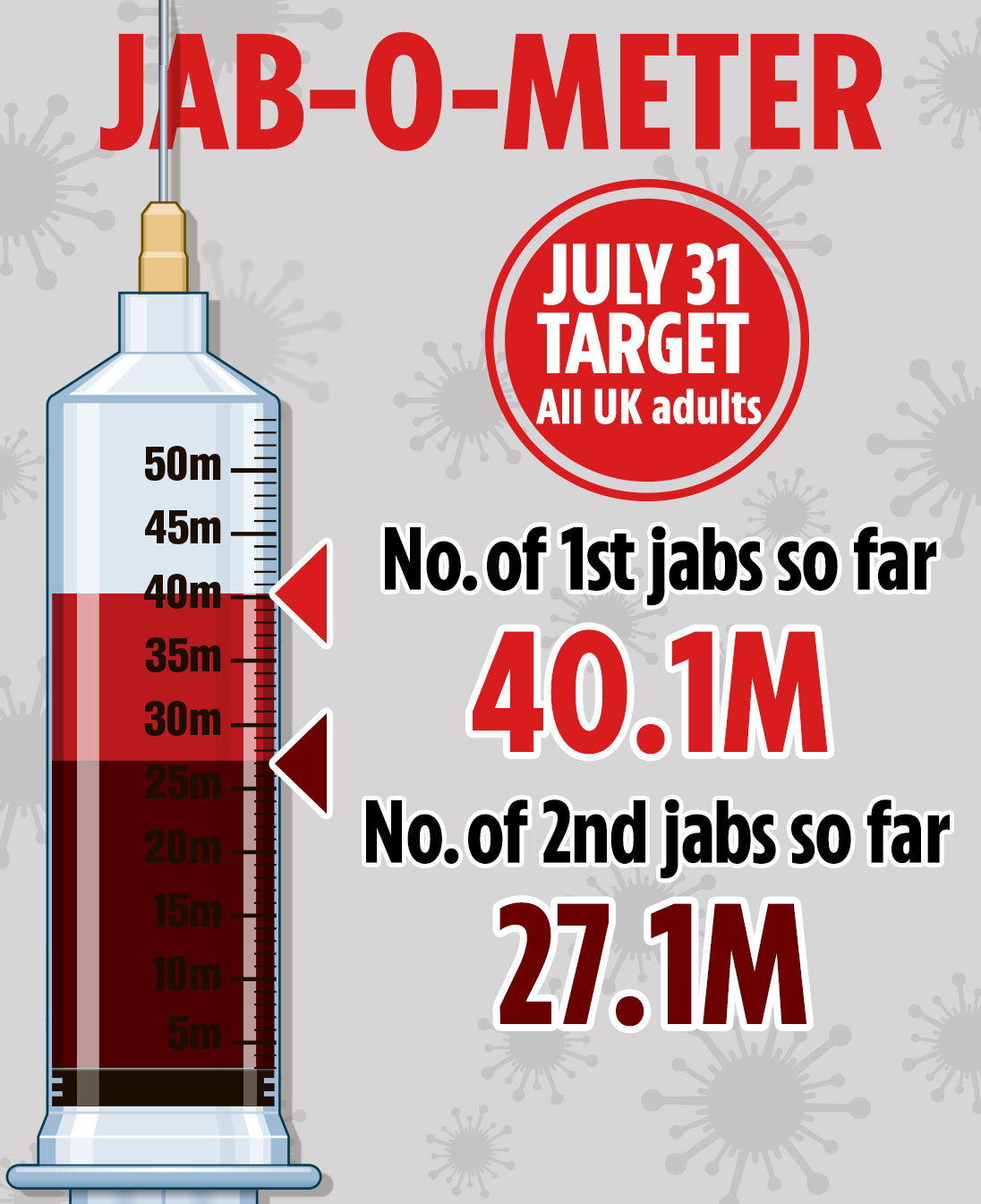 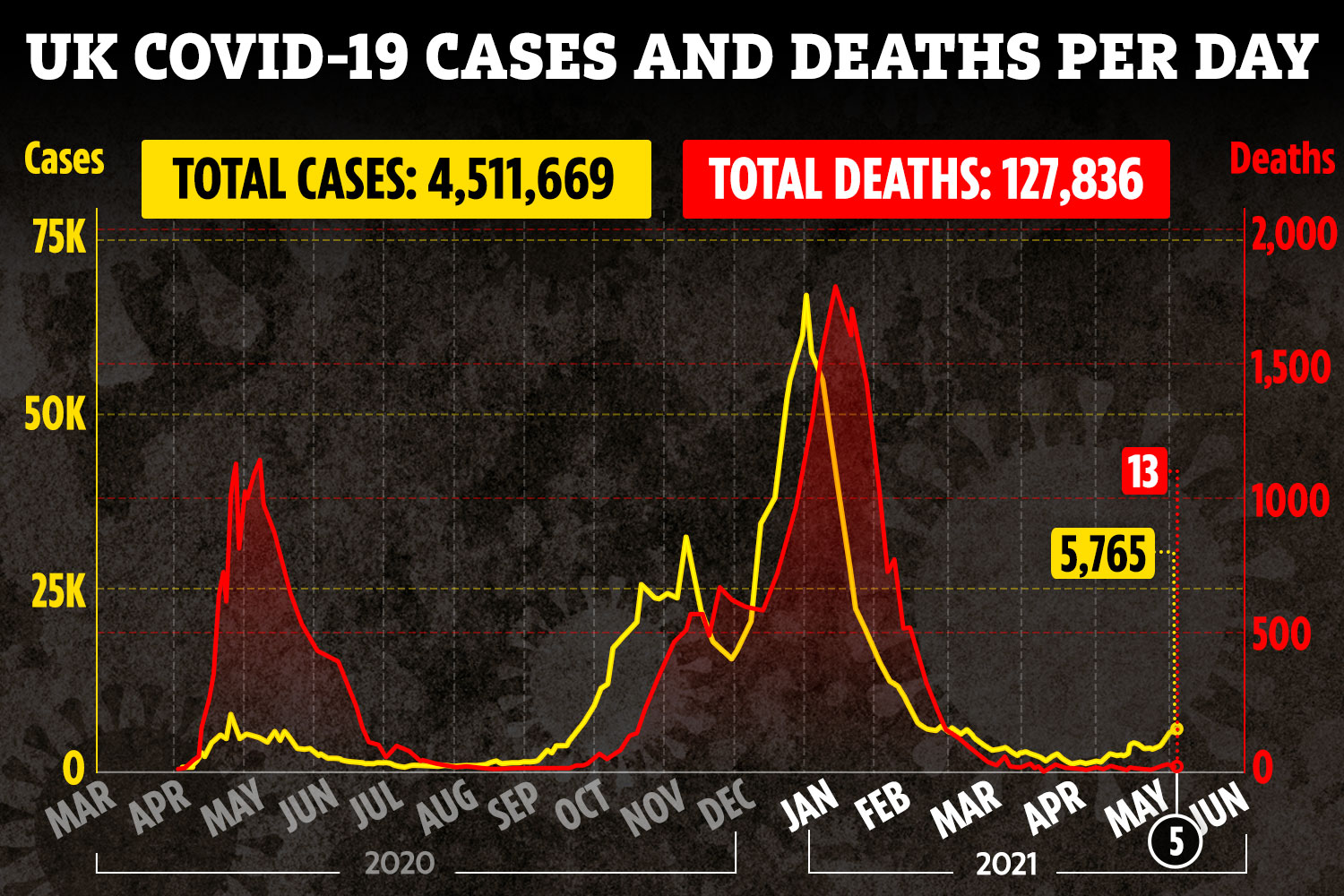 What are Starlink satellites and how many are in orbit?

Nike Invented Self-Lacing Sneakers Because the Future Is Now