A peek inside a tiny chapel in the Channel Islands, measuring just 16ft by 9ft

by Anderson
in Travel
0
SHARES
Share on FacebookShare on TwitterLinkedin

Saying a little prayer is an appropriate way to practice at this pint-sized chapel.

Guernsey in the Channel Islands is home one of the world’s smallest chapels.

The place of worship, which is tucked away in Les Vauxbelets, St Andrew, measures just 16ft by 9ft and is adorned with hundreds and thousands of pieces of broken pottery, giving it a magical, otherworldly feeling.

Iridescent mother of pearl shells are dotted around the exterior and interior, with their smooth innards shimmering in the sun.

On stepping into the chapel, it has a calm and serene feeling and you can’t help but be wowed by the jewel box-like interiors.

Small stained-glass windows cast a rainbow of colour on the floors which have been fashioned out of smooth pebbles. 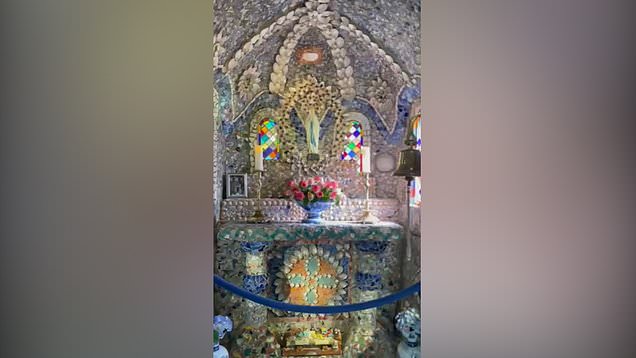 To view this video please enable JavaScript, and consider upgrading to a web
browser that
supports HTML5
video

The smashed pieces of pottery have been carefully arranged to create an intricate mosaic that could keep your eyes busy for days.

A tiny winding staircase leads you down to another alter area and further down to an exit door.

He planned to create a miniature version of the famous grotto and basilica at Lourdes in France.

However, his first effort, measuring a tiny 9ft long by 4.5ft wide, was criticised by the other brothers, so Brother Deodat demolished the building overnight.

He built another version, which was completed four months later and this survived until September 1923.

This time around, Brother Deodat decided to demolish it for a second time after the Bishop of Portsmouth failed to fit through the doorway.

He then started work on another construction, which resulted in the abode which still stands today.

In 1939 Brother Deodat returned to France due to ill health.

After his departure, the care of the Little Chapel was entrusted to Brother Cephas, who continued to decorate the building until his retirement in 1965.

In 1977, a committee was established to restore the chapel and today it falls under the care of The Little Chapel Foundation.

Public donations are used to keep it intact.

The chapel is open from 9am to 4pm throughout the summer and there is no entry charge.

Visiting Guernsey and what to do

Guernsey is set to open to all UK visitors who have been vaccinated without any Covid-19 restrictions from July 1. Flights run daily from various destinations across the UK and there is a ferry service departing from Portsmouth with Condor Ferries.

Along with seeing the Little Chapel, here are some other top things to do while visiting the island, which measures 9 miles (14.5km) in length and a 3 miles (5km) in width:

Get in touch by emailing [email protected].


MORE : These are the world’s top 25 hottest new hotels


MORE : Couple quit their jobs and convert old school bus into mobile home to travel around the US


MORE : Inside the new Forest Holidays cabins in Delamere Forest – and why you should visit

Fadi Awad’s “Step Back In Time” In The Music Week (UK), Germany, and Euro Indie Charts!

IPL 2022, PBKS vs CSK: Rayudu’s banging innings could not win Chennai and Punjab won the match by 11 runs

Notice to America: We are NOT all as stupid as Prince Harry