SIR Richard Branson has described his landmark spaceflight over the weekend as “extreme in every way” and a “dream come true”.

Speaking to The Sun, the 70-year-old hit back at critics including rival billionaire Jeff Bezos who have questioned the validity of the mission carried out by his company, Virgin Galactic.

A weightless Sir Richard in his Virgin Galactic spacecraft[/caption]

Sir Richard made history on Sunday after successfully reaching the edge of space in a commercial rocket plane.

The vehicle, called VSS Unity, soared into the air from New Mexico strapped to a carrier aircraft before detaching and blasting 50 miles above Earth.

Sir Richard and five crewmates experienced about four minutes of weightlessness before Unity turned around and glided back to Earth.

The billionaire, who founded Virgin Galactic 17 years ago, said the view of Earth from the craft’s windows was “more beautiful” than he’d imagined.

“I’ve been dreaming about this since I was a child and what surprised me was that it was more extreme than I’d dreamt,” he told The Sun.

“The ride up was extreme, but it should be – a ride to space always is.

“Going from nought to three Mach [three times the speed of sound] in eight seconds is extreme. The noise and absolute silence as one enters space is, too.”

He added: “Looking out of the window, I realised that our Earth is more beautiful than I’d imagined. It was just stunning.”

I’ve been dreaming about this since I was a child

Sir Richard has long talked up his desire to go up on one of Virgin Galactic’s first flights.

The company was founded in 2004 with the aim of taking paying tourists to space within three years but has been hampered by years of delays.

A fatal crash during a test flight in 2014 grounded Virgin Galactic’s fleet for two years while it worked on tightening up safety protocols.

Asked whether he was nervous ahead of Sunday’s hour-long flight, Sir Richard admitted that he was worried about letting down his crewmates.

The Virgin boss was joined on the flight by three Virgin Galactic mission specialists, as well as two pilots.

“I wasn’t nervous on the day,” Sir Richard told The Sun. “But I had prior to that day been worried about letting the side down.

“Everyone else going up was much better trained than I was.

“But at the moment I realised that my body was coping fine with the g-forces, I just relaxed and thoroughly enjoyed every minute of it.”

How Virgin Galactic will fly tourists to space

Unlike most spaceflight companies, Virgin Galactic does not use a rocket to reach space.

Instead, its VSS Unity rocket plane ascends toward the heavens strapped to an enormous carrier plane called White Knight Two.

At around 50,000ft above Earth’s surface, Unity detaches from its mothership. For comparison, commercial airliners fly at 30,000ft.

Once separated, Unity fires up its rocket engines and flies at a near-vertical angle into suborbital space.

After the rocket motor has fired for around a minute, the pilots safely shut it down, giving riders four minutes of weightlessness.

They can peer at the Earth below through 17 enormous windows that perforate the cabin walls and ceiling.

To descend, the pilots perform a gradual backflip and fire up the engines.

Unity returns to Earth by landing like a commercial airliner on a runway at Virgin Galactic’s spaceport in the New Mexico desert.

Ahead of the flight, Virgin Galactic had copped some flack from Blue Origin, the space tourism firm founded by fellow mogul Jeff Bezos.

The former Amazon CEO and his brother are heading to space on July 20 on board Blue Origin‘s spaceship, New Shepard.

But while Sir Richard’s craft maxes out at an altitude of 50 miles – the edge of space as defined by Nasa – Bezos’ tops the so-called Karman Line.

That’s the internationally recognised boundary of space about 62 miles above Earth.

Writing on Twitter last Friday, Blue Origin dismissed Unity as nothing more than a “high altitude airplane” that doesn’t even technically reach space.

Speaking to The Sun, Sir Richard said his response to the remarks was to “simply ignore them”.

“I have my astronaut wings,” he said. “Nasa, who are the global authority on this, have always recognised 50 miles as the boundary of space. These are the rules we work under.

“Blue Origin’s initial spaceship may do a handful or two handfuls of seconds more in space than us, but our future spaceship will do the same.” 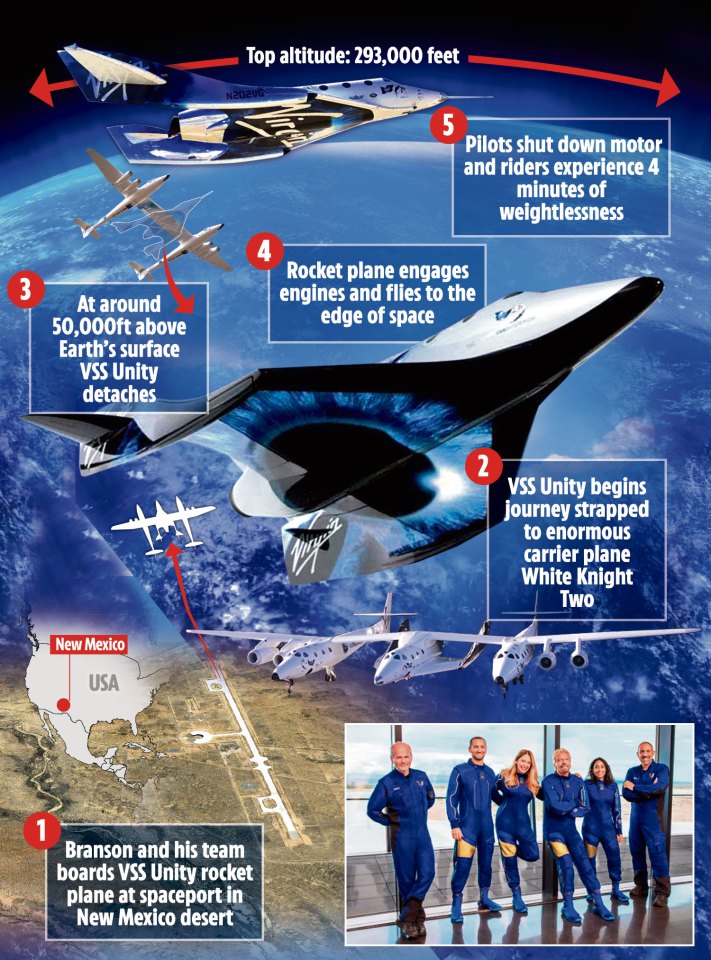 He added: “It really makes no difference to the overall experience that people have.

“I think if anybody looks at the pictures taken during the mission, they will see that we were firmly in space.”

The launch was Virgin Galactic’s fourth spaceflight and its first with a full crew of six on board.

The company has said it plans to take paying customers up starting next year.

Those first to fly will be the 600 wannabe astronauts who have reserved tickets at $250,000 a pop.

Virgin Galactic will now focus on getting more test flights under its belt this year and expanding its fleet of space planes.

The company even has plans to set up an “orbital hotel” in future.

“The flight means that Virgin Galactic have now got the experience to start mass-producing spaceships so that in future years the price of tickets will come down, and more people will be able to travel,” Sir Richard said.

“Our technicians will be developing more and more exciting things for future years, which will enable people to go further, faster. Maybe one day, we can even have a Virgin hotel in space.”

After detaching from its carrier plane, Unity blasts to the edge of space under its rocket booster[/caption]

At around 293,000ft the engine shuts down and passengers experience four minutes of weightlessness[/caption]


Moon 'wobble' could cause mass FLOODING across Earth, scientists warn


Owners should get their cat’s CONSENT to pet them, experts say

EYES TO THE SKIES


You can see the Moon, Mars and Venus in a line with NAKED eye tonight

In other news, stunning footage of Sir Richard floating around his Virgin space plane has gone viral on social media.

Scientists have identified the place where aliens are most likely lurking in the Milky Way.

And, China launched three astronauts into orbit to continue building its own space station.