BORIS Johnson is braced for further Tory fury over proposed vaccine passports over fears they could become the “new normal” for going to pubs and restaurants.

Senior backbench MPs are threatening to give the PM a bloody nose after a senior minister admitted they would be a “big ­cultural change” for Britain.

Kit Malthouse could not rule out an expansion of the policy, set to target nightclubs, to other indoor venues such as ­restaurants and bars, like in some European countries.

The plan for vaccine passports has been met with fury[/caption]

Covid cases continued to drop yesterday even as the nation enjoyed its renewed freedoms this weekend — triggering calls for the plan to be dropped.

But senior backbencher Tom Tugendhat joined the ranks of Tory MPs who are uncomfortable with the proposals.

He tweeted: “If we need a vaccine for events like a nightclub — why not to travel by train, or go to a shop?

“What other choices will result in denial of service?”

And he expressed fears that requiring them for settings like nightclubs and universities is just the thin end of the wedge.

He said of the proposals: “I’m not in favour because I think you create new normals.

“This is why identity cards are such a bad idea, because you eventually give people power to demand your identity.

“First off it starts off with ‘just it’s a convenience’ then it’s ‘oh well, it’s a requirement but only on certain occasions’.

“Then it’s a requirement that you must be able to prove it and soon you’re giving jobsworths the power to check on who you are at different times.”

He added: “This is another form of ID card. It’s an ID card that happens to have your vaccine status on it but it is an ID card.

“It does concern me that you’re constantly eroding the civil liberties of British people.

“I’d be very very cautious that we manage to stay a British-type democracy.”

The PM is facing the biggest rebellion of his premiership over plans to introduce vaccine passports for nightclubs from September.

More than 40 Tory MPs have signed a Big Brother Watch statement opposing the plans, which will have to go to a Commons vote.


Javid apologises for suggesting Brits should not 'cower' from Covid

Many others are said to be privately concerned about the plans amid fears mission creep could see them later imposed for pubs and restaurants.

That means ministers could end up needing Labour support to get them through, with the Government’s majority of 80 under threat.

But Sir Keir Starmer has suggested his party could vote against jab certificates, which he has previously branded un-British. 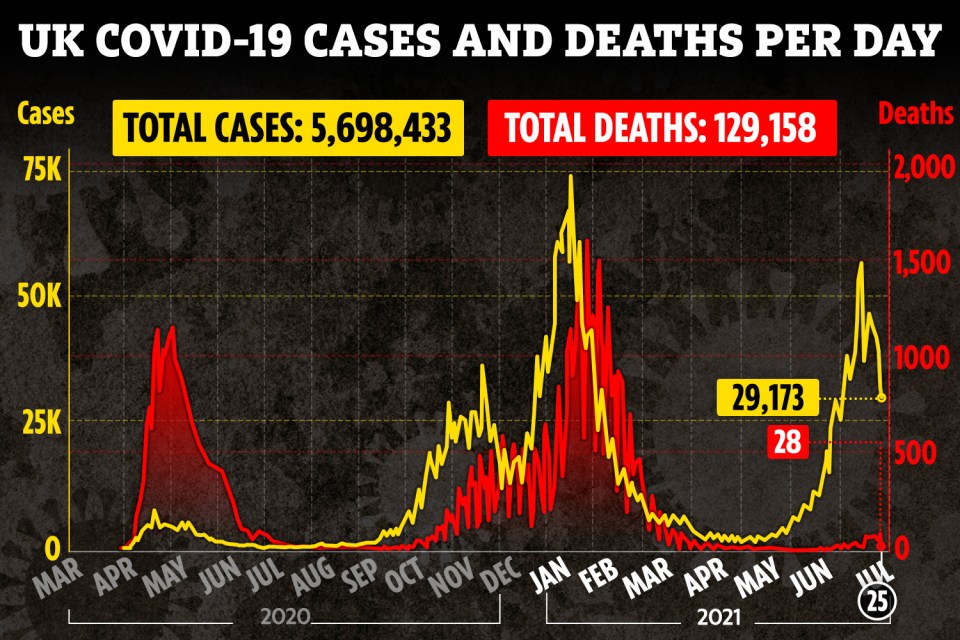 UK smoking ban explained: When did it come into force and what are the rules?

There are 21 different Covid symptoms and most common just feel like a cold, expert warns