Biblical earthquake that rocked Jerusalem 2,800 years ago DID happen as experts uncover ‘layer of destruction’ in ruins

ARCHAEOLOGISTS have unearthed a “layer of destruction” that proves the Biblical earthquake 2,800 years ago in Jerusalem DID happen.

Books of Amos and Zechariah in the Old Testament detail the tremor in Israel – but no evidence could prove it had rocked the capital city.

Now, excavations performed by the Israel Antiquities Authority (IAA) in the City of David National Park have exposed a wreckage of collapsed walls, broken pottery, and other fragments of history underneath the surface.

Oil lamps, storage jugs, cooking equipment, and small tables were also retrieved by the team, who pieced together some of the remnants.

As the artifacts were found deep into the excavation site, researchers believe locals built on top of the rubble following the quake – which preserved the evidence of the event beneath them.

Experts believe that due to the lack of evidence of an ancient conquest or a fire, the ruins must have been damaged by an earthquake that hit the country during the 8th century BC. 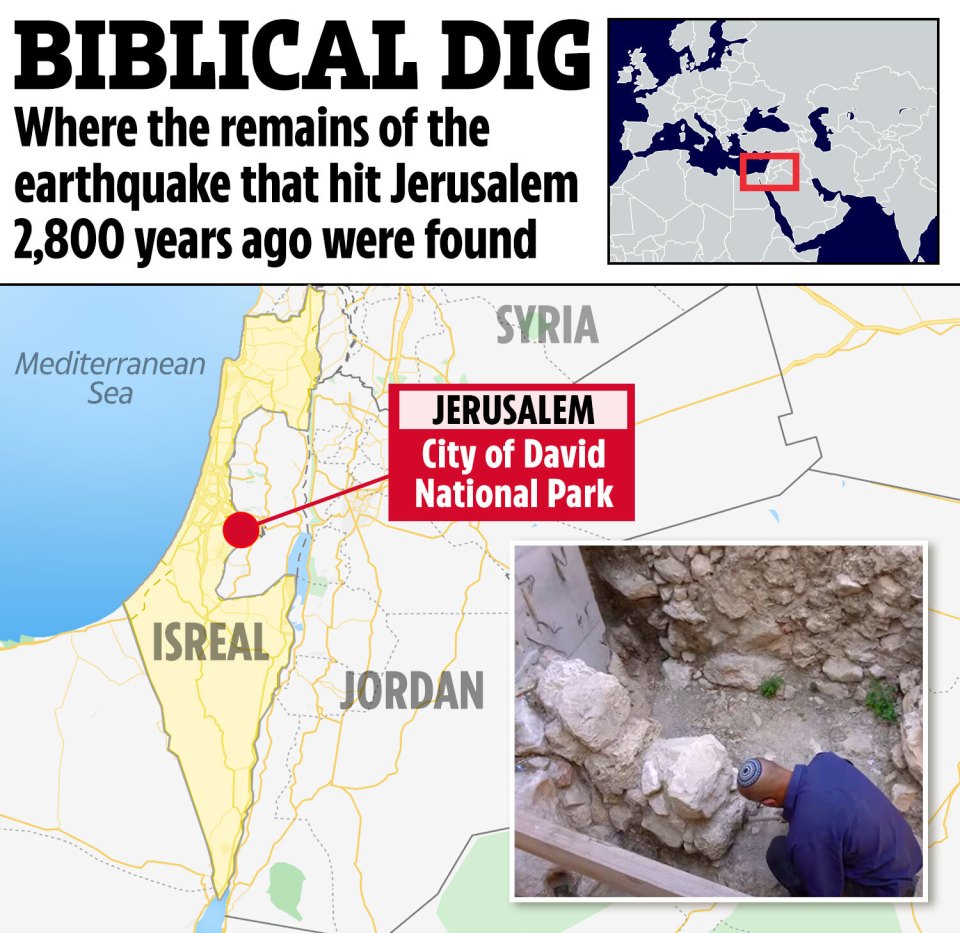 The excavation uncovered a string of artifacts including pottery, oil lamps and even small tables[/caption]

A passage of scripture from the book of Amos first discusses the quake, reading: “The words of Amos, a sheep breeder from Tekoa, who prophesied concerning Israel in the reigns of Kings Uzziah of Judah and Jeroboam son of Joash of Israel, two years before the earthquake.”

The discussion of the quake in the Bible some 200 years later shows the lasting impact of the natural phenomenon and finally confirms the suspicions of historians.

Similar evidence of the earthquake has been found during other excavations in surrounding areas, but this discovery proves it struck Jerusalem.

IAA excavation directors Dr. Joe Uziel and Ortal Chalaf said of the findings: “When we excavated the structure and uncovered an 8th century BCE layer of destruction, we were very surprised, because we know that Jerusalem continued to exist in succession until the Babylonian destruction, which occurred about 200 years later.

“We asked ourselves what could have caused that dramatic layer of destruction we uncovered.

“Examining the excavation findings, we tried to check if there is a reference to it in the biblical text,” they continued in a statement.

“Interestingly, the earthquake that appears in the Bible, in the books of Amos and Zechariah, occurred at the time when the building we excavated in the City of David collapsed.”

The archeologists compared the site to other areas where they have uncovered similar traces to “make the connection” and determine that “this isn’t an isolated event but rather something more widespread.”

Previous digs throughout Israel and teams drilling into the seabed of the Dead Sea have also helped to substantiate the Biblical account.

On the road with: Monica Vinader reveals the cities that inspired her jewellery designs