Mystery over ancient tribe ‘mummified by the desert’ 4,000 years ago solved

THE MYSTERIOUS origins of an ancient tribe whose bodies were found perfectly preserved in a desert in China have finally been identified.

DNA analysis of Bronze Age mummies discovered in tombs in the Tarim Basin reveal they belonged to indigenous folk descended from ancient Eurasians.

The mummies’ unusual features, clothing and diet sparked a decades-long debate over where they came from[/caption]

The finding flies in the face of previous research on the corpses, which had suggested that they belonged to western travellers.

The groups’ Western features and unusual dress and diet had led experts to conclude that they were migrants from southern Russia.

The new research, published Wednesday in the journal Nature, puts to bed once and for all a debate that has raged for decades.

The area’s dry, arid conditions and freezing cold nights naturally mummified the remains of locals, who were buried in boat-like tombs in the desert.

The most famous of these mummies is “the Beauty of Xiaohe”, whose facial features, woollen clothing, hair and even eyelashes remain intact.

With their long noses, red and light-brown hair and unusual clothing, experts long believed that they were migrants from the Black Sea region.

Genetic analysis of 13 of the oldest mummies, who are up to 4,100 years old, has now revealed that they in fact originated a little closer to home.

Researchers compared their DNA to those of five individuals who lived further north in the Dzungarian Basin about 5,000 years ago.

The researchers concluded that the Tarim Basin were not westerners, but descendents of Ancient North Eurasians (ANE).

The group is thought to have died out during the last ice age roughly 11,500 years ago.

The ANE genome only exists in certain communities in the Holocene, the current geological epoch.

Native Americans and indigenous Siberians retain the highest percentage, at about 40 per cent of their DNA.

The ancient community likely experienced “an extreme and prolonged genetic bottleneck prior to settling the Tarim Basin,” according to a statement from the Max Planck Institute for Evolutionary Anthropology, which co-sponsored in the research.

“We have found one in the most unexpected place.”

The mysterious desert wanderers appear to be the most direct known ancestors of pre-farming Asian populations, according to the researchers.

Their northern neighbors from the Dzungarian Basin seem to be a mix of this ancient population as well as Siberian migrants.

“The Tarim mummies’ so-called Western physical features are probably due to their connection to the Pleistocene Ancient North Eurasian gene pool,” the researchers wrote in their paper.

This points “towards a role of extreme environments as a barrier to human migration.” 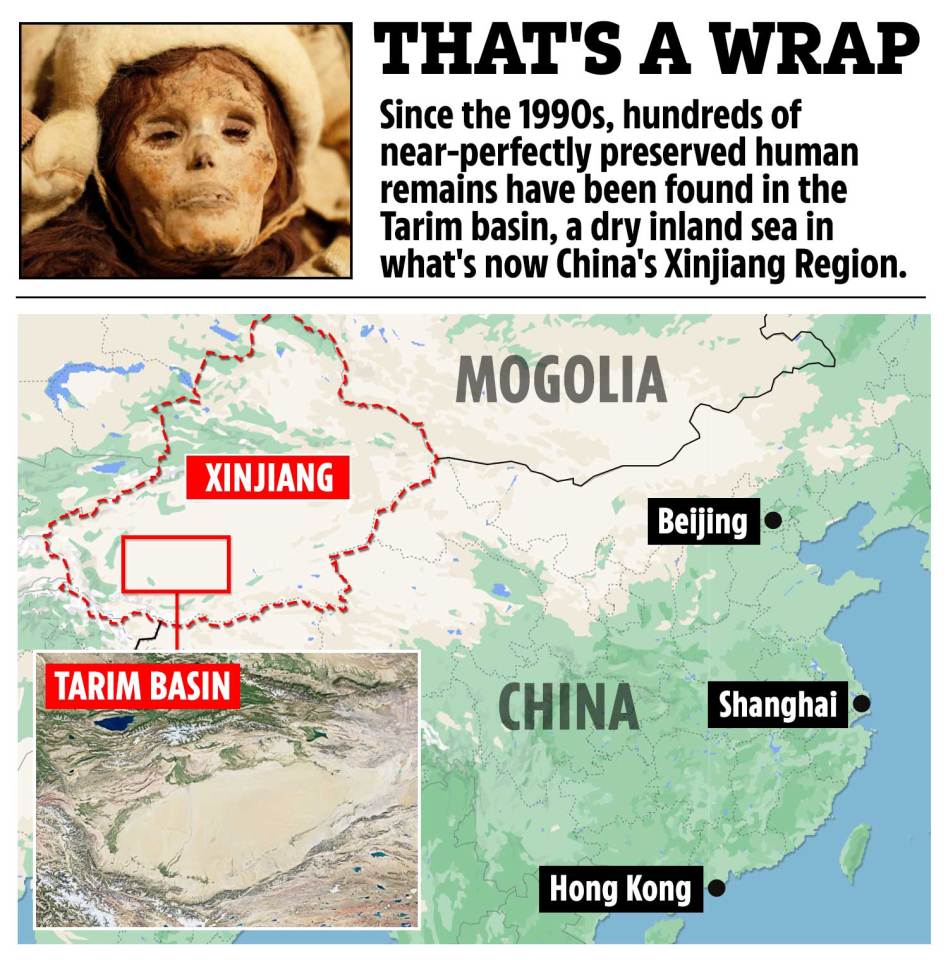 In other news, the wreck of a US ship that hunted Nazi spies and sailed the seas for 88 years has been found after a decades-long search.

Woolly mammoths were killed off by climate change and not humans, according to new research.

And, a scuba diver has found an ancient sword that experts say dates back to the Crusades.

Kenny, the 70s called and they want their sexist beliefs back

Climate change could lead to future like some “Hollywood dystopian films”, expert claims