I’ve got a Massey Ferguson, and it’s red and throbbing. So…fancy a ride, says Jeremy Clarkson

ALL week, people have been trying to claim that tractors can often be muddled up with pornography.

But let me assure you, this is definitely not the case.

Tractors are not at all arousing, no matter what an MP may think[/caption]

You get heavy engineering on a tractor which is designed to work in cloying mud, and the pouring rain, while pulling three tons of complex ironmongery.

It’s about as far from an Emmanuelle movie as it’s possible to get.

For example, I went out to my tractor this morning and had to spend several minutes rubbing a soothing oil gently into its shaft, which I then tenderly inserted into the tight and fully lubed hole on my drill.

I then climbed into the cab and turned the key.

The throbbing, 270-horsepower engine roared into life and, as it settled down to a rhythmic pulse, I could feel the gentle vibrations through my seat. “Aaah”, I sighed, contentedly. 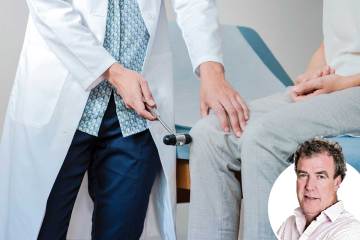 Doctors slashing hours? Their grandkids will suffer for it 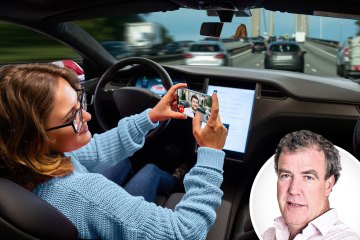 I then grabbed the gear lever firmly in my right hand and jabbed it forwards until I felt the box succumb.

And then I was off, into the downy, dew-kissed fields, to produce a smooth spread of seed.

Some people call what I was planting “rape” but that’s too brutal in my mind.

I prefer to think that it will become a pretty yellow flower that will, in time, produce an oil which I use to rub into meat. Making it tender and juicy.

Later in the evening, with my seed burrowing its way into the dampness, I removed the drill, guiding the shaft backwards before fitting the mole plough, which I used to penetrate the earth.

It always worries me when I do this because I produce so many emissions.

And then it was time to trim the hedge.

You need to be careful doing this, starting at the bottom and then working your way upwards, feeling the contours and trying to create a pleasing shape. One false move and you could end up with no hedge at all.

Eventually, though, the tractor had done all its work and soon it’ll be time to wheel out the combine harvester.

Neil Paris resigned as an MP after his embarrassing mistake[/caption]

And who knows who could be looking over your shoulder if that were to happen.

WE heard this week about how doctors grew a penis on a man’s arm and then left it there for six years before finally putting it between his legs.

There are so many things to think about with this story.

But the headline for me is that the man went to the lavatory one day with his original penis and it just fell off.

Can you even begin to imagine how sad and disappointing that would be?

JOANNA LUMLEY said this week that when people meet the Queen, they often say the first thing that comes into their heads.

And then have to carry the memory of their foolishness to the grave.

I don’t know about that because I’ve never met the Queen.

But I did once meet Nelson Mandela and I started the conversation with “Have you ever been to a lap-dancing club?”

So I know what Joanna means.

Should a suggestion for able-bodied actors be taken the wrong way?[/caption]

IT was suggested this week that able-bodied actors should not be allowed to play Richard III, in the same way that white actors are not asked to play Othello.

Does this mean, then, that the next time a director is casting someone to play Hitler, he can only give the role to someone who’s a Nazi?

THE Russians claim to have a nuclear torpedo which, they say, would explode off the top of Scotland, causing a 500-metre-high radioactive tidal wave that would bury the whole of Britain under a layer of atomic soup, making it uninhabitable for 10,000 years.

This sounds terrifying except for one small detail.

This technology is from the same country that gave us the Lada Riva.

So it’s about as scary then as, er, the Russian army.

I LITERALLY cannot get my head round the idea that soon, in America, it could become illegal to have an abortion.

It doesn’t matter if the child was a product of rape or if it’s going to be born dead, women will not be allowed to terminate the pregnancy.

Now I know there are some nutters who think this is fine, in the same way that there are those who think the Earth is flat and that the moon landings were faked.

But in America – which is the most powerful country in the world – it’s not just a handful of people who are anti-abortion.

Thirty-seven per cent of them are. That’s 120million people. Who want to take one giant leap backwards. To the bloody Middle Ages.

A WOMAN called Kim Kardashian turned up at a ridiculous party for idiots in New York this week wearing a dress that had once belonged to Marilyn Monroe.

Fine. If that’s what turns her on.

But it was so tight that she simply couldn’t walk up the stairs.

So now she knows how the Daleks feel.

It all points to bus

A NOTTINGHAMSHIRE woman called Caroline Henry was elected as a police and crime commissioner after campaigning hard on the dangers of speeding.

She said tackling it was a priority and that she wanted an “effective and efficient” police response to the problem.

So I was a bit surprised to hear that she’s been caught speeding.

Not once. But five times. In just 12 weeks. She claims that on two occasions, she was dealing with emergencies.

Good luck with that one, love.

If I were you, I’d take the points like a (wo)man, and concentrate in future on people who vandalise buses. Because that’s what you’re likely to be using for a little while.

A MONTH ago, I didn’t feel very well so I isolated myself and took a Covid test, which came back negative.

As I had all the Covid symptoms, I took another and then, when that was negative too, another.

Which also said I was clean. I therefore called my doctor who said, “Have you considered the possibility you have a cold?”

I therefore carried on as normal, as all men do, not moaning in the slightest until after ten days I thought, “Hang on. This cold is lasting a long time.”

So I did another Covid test and it came back positive.

Which means I must have caught the damn virus while I had a cold. I can tell you that for me, Covid was worse the second time around and the effects are lasting longer.

Nine days after a negative test, I am short of breath when I do up my shoelaces and exhausted after climbing a flight of stairs.

Walking the dogs is a real struggle.

So I called my doctor again who said, “Have you considered the possibility that you’re fat?”

It’s one thing on top of another.