IT is a grotesque affront to our democracy.

The immigration policy of this supposedly sovereign nation — our post-EU independence newly established only two years ago — crushed by the hasty, late-night ruling of one judge in a foreign court. And yet it is worse still.

Because the European Court of Human Rights will not even identify the person whose pen struck through the strategy of our elected Government and trumped rulings in our High Court, Appeal Court and Supreme Court.

This cannot stand. It must sound the death knell for the ECHR in Britain.

This, and years of other insane rulings against the will and interests of our people, were NOT what Churchill imagined when he established it as a bulwark against Nazi-style fascism.

We must abandon this Euro court and its Convention. We can enshrine all that is positive in it into a new Bill of Rights. 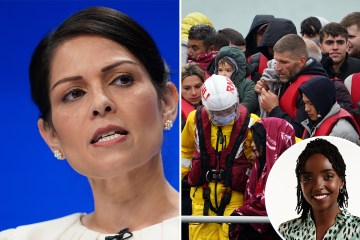 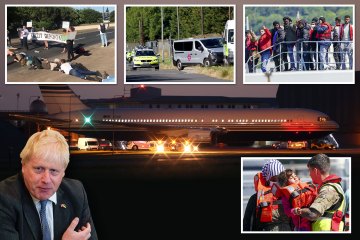 But our Government MUST be able to control our borders . . . to deport foreign criminals, and economic migrants arriving illegally.

Those we elect must wield this power. Not left-wing lawyers, clueless churchmen and no-borders campaigners (one, naturally, a Labour candidate) via our liberal courts.

And certainly not some Strasbourg judge.

This is the political minefield Boris Johnson must now negotiate.

DAME AT THE RACES

Millions will back him to succeed, as they did in unshackling ourselves from the EU.

In 2018, 299 migrants arrived illegally in small boats. On Tuesday alone 444 did so, as we were barred from deporting a single one. The floodgates are open.

This madness must end.

Yesterday they would have witnessed the sad desperation of Labour’s infamously boring leader reciting scripted gags about Stars Wars and Love Island.

His frontbench’s grim faces said it all.

But his attempt to goad Tory backbenchers over Boris being branded the “Conservative Corbyn” was bizarre.

We’d have no problem him mocking his predecessor’s voter-repelling uselessness . . .  had Starmer not campaigned to make the anti-Semitic clown PM.

FOUR months into the war Russia’s appalling brutality still has the power to shock.

As we report today, banned cluster bombs have maimed hundreds of innocents in the city of Kurakhove alone.

But the cold reality is that Putin and his murdering, fascist hordes care nothing for the conventions of war.

It is depressing that so many in Europe now want a swift conclusion, even if Ukraine must give up territory.

No! We must not waver in backing President Zelensky.

Evil must reap no reward.

After two weeks of weakness, the market rebounded, with Tata Consultancy Services benefiting investors the most.

VP Marketing at Infinity: 'Humans are behind all decisions'